When the Levee Breaks, Sugar

UPDATE 02/16/16: The U.S. Army Corps of Engineers plans to release water this week from Lake Okeechobee south to Everglades National Park, where it is badly needed. Doing so will alleviate the burst of polluted fresh water released into the Caloosahatchee and St. Lucie rivers and slow some of the negative impacts already taking place in those estuaries. The Everglades has been drier than normal for several years, and the fresh water influx will help balance the salinity levels to restore marsh areas. The water would pass through a reservoir south of the lake, where it will be purged of some of the unwanted nutrients from the lake.

In case you haven’t heard, Lake Okeechobee is rising. El Niño has spanked several areas in the U.S. with higher-than-average rainfall, and the second largest freshwater lake in the lower 48 states is now at 16 feet. Its average depth is between 10 and 12 feet. Officials with the U.S. Army Corps of Engineers and the South Florida Water Management District worried the 32-foot tall, 143-mile levee surrounding the lake could fail if any more rain fell. Ironically, this is “the dry season.”

So last week they unleashed up to 4.9 billion gallons of water (think 7,400 Olympic swimming pools) per day out of two dams: one heading east via the St. Lucie River to the Atlantic Coast, and the other heading west via the Caloosahatchee River to the Gulf of Mexico. These outlets to the rivers were created decades ago to help manage the lake’s water levels. The “wet” season for the region is June through September, and for the past several years, these releases have unleashed torrents of dirty brown and sometimes green water through these canals.

Where does that polluted water come from? The agricultural and other pollutants dumped into the lake from areas north. Why not allow excess lake water to flow south, as it had for nearly 6,000 years before humans got involved? Because politically and financially powerful U.S. Sugar (hereon called Big Sugar) owns more than 60,000 acres of land directly south of the lake to grow and refine sugar cane. And because this has been the status quo for decades when state and federal regulators and the Corps of Engineers first laid out the plans for water management. In fact, it was because of the sugar industry that the water was diverted east and west to make those massive sugar cane fields arable.

So let’s summarize: An ill-conceived plan by man to redirect Nature’s intended path for water drainage to accommodate Big Sugar, as well as big development, now has imperiled several thousand people, their homes, their drinking water and the health and welfare of millions of acres of precious wetlands which serve as the nursery for some of the most ecologically rich, coastal habitat in the country.

And here’s the painful kicker. The state had the option to purchase that land as the first step to help restore the withering Everglades for several years up until last Oct. The state failed to exercise that option, and now Big Sugar wants to put up several thousand homes and big warehouses. Last fall, Fla. voters overwhelmingly approved a measure that would use some real estate tax money to buy lands for conservation and improved water quality. But the state government has so far used those funds toward agency support (salaries, insurance, etc.), not buying the more than 40,000 acres Big Sugar agreed to sell seven years ago. Several environmental groups have filed a lawsuit that is currently pending. 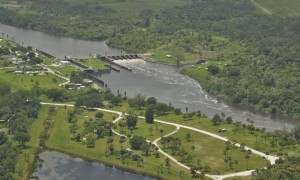 The nitrogen and phosphorous that pours into the lake from agriculture gets blasted out of canals into the St. Lucie and Caloosahatchee estuaries. The excess nutrients wreak havoc on the ecosystem, causing oxygen-choking algal blooms, massive fish kills and severe damage to prime shellfish habitats. Moreover, the influx of freshwater tips the delicate salinity balance in the marsh, killing vital grasses and forcing out species living in the brackish (part salt, part fresh) water. Conversely, during the dry season, the Corps releases much less fresh water (because it’s used for agriculture) than the Everglades needs to sustain that balance. That is, when the salinity gets too high, root structures get damaged and the vegetation can die in the marsh.

A technical study conducted by the University of Florida Water Institute last year makes several recommendations to reduce these outflows into the St. Lucie and Caloosahatchee river systems. Chief among them is to restore southerly flows into the estuaries after the water from the lake has been stored and treated in yet-to-be-built reservoirs. The study calls for similar reservoirs to be built or extended north of the lake and in or near the St. Lucie and Caloosahatchee basins. All of this would also help restore the Everglades.

As a former journalist, I have an inherent mistrust of politicians because too many times I’ve seen up close how they essentially followed the money. As a recreational fishermen, I don’t trust the state to consider the long-term economic impact if recreational fishing plummets because vital species can’t tolerate drastic habitat change. The impact for commercial fishermen could be equally dire.

As a New Orleans native whose elderly parents rode out Hurricane Katrina, only to leave two days after the storm on the last passable road and ultimately sell their house because the infrastructure was a shambles, I inherently don’t trust the U.S. Army Corps of Engineers.

About a year after Katrina, I spoke to the Corps colonel in charge of rebuilding the city’s levees. I asked him point blank why the Corps was restoring the levees to their previous standard of being able, in theory, to withstand a category 3 hurricane, when the city had just been devastated by a category 5 storm. He said the reconstruction was following the path laid out by Congress and the state. I asked him if he thought that was a good idea, and he said, “It’s not my call.”

Right now, the call on the future of the Everglades and the Indian River basin is in the hands of Florida’s governor and legislature. I only hope there are enough politicians outside of the mold that made me mistrustful in the first place to do the right thing. I hope enough of them will see that actually delivering on the promises they made to voters … to protect precious resources like the Everglades and surrounding watersheds … far outweighs surrendering integrity to the financial puppetry Big Sugar offers.

If not, getting re-elected won’t be so easy if a major environmental/economic disaster occurs and Florida becomes more of a poster child for environmental failure than it already is.

Here is some additional reading: