Should fishermen be the face of climate change?

This was one of the more compelling questions posed at the Maine Fishermen’s Forum in Rockland on March 4.

It’s an interesting posit with many implications. For anyone in and around the industry, the answer is pretty straightforward. Fishermen are on the frontlines of how climate change impacts fisheries around the world. Along with researchers, fishermen are the first to see changes in everything from migratory patterns to spawning success and recruitment and predator/prey relationships.

Just ask Linda Williams. She is former chair of the Western Rock Lobster Council in Western Australia. Her husband and son fish for western rock lobster. She told a crowd of 300-400 that fishery has undergone mammoth changes in the past decade. Ten years ago, the average annual haul was 10 million kilograms, brought in by 600 boats during a roughly nine-month season. Now it is 5-6 million kilograms, brought in by 250 boats year round. The interesting catch? They are now logging record profits and working less.

So how did this happen? In 2009, lobstermen and researchers noticed a significant drop in the number of late larval stage lobsters in normal locations. Females were releasing eggs earlier than ever, which affected migratory patterns of the lobsters as they grew from larvae. The end result would be fewer lobsters caught in season and a downward spiral. This coincided with a warming trend of about 1-3 degrees Celsius over long-term summer averages, which also coincided with changing currents along the Western Australia coast.

Seeing the potential for disaster, lobstermen, scientists and policy makers worked together to form a quota system based on predictive analyses of future harvests determined by current larval settlement (the numbers and location of late larval stage lobsters). The industry anticipates how changing water temperatures and shifting currents will affect harvest 3-4 years in advance. Now the fishery operates profitably, even as the oceans are warming around them.

That kind of adaptation was the theme from other commercial fishermen. John Mellor fishes for Dungeness crabs and sablefish (black cod) off California. He sensed trouble in the water a year ago, noticing a milky, bluish hue and seeing big schools of anchovies flopping around the surface gasping for air. The culprit was algal blooms sucking up too much oxygen and releasing high concentrations of domoic acid (a neurotoxin) along the West Coast. California’s witness to climate change has coincided with this year’s El Nino, which extended a three-year period of lower than average storm and wind activity that would otherwise mix up the currents and slow the progress of algal blooms and the resulting red tides.

Filter feeders like clams, mussels and worms absorb the neurotoxin, and the crabs eat them, posing a threat to human health. Mellor explained the devastation to the industry when shortly before this season was to begin, California shut down the fishery indefinitely. Crabs represent 2/3 of his income, and he said he was fortunate to have a sablefish permit just to keep operating. Many fishermen are facing foreclosure etc.

“I see you enjoying your lobster fishery,” he said to the audience. “I suggest you keep an eye on the water. If you see it start to change a milky blue, be prepared.” He said fishermen need to adapt as quickly as the oceans are changing to survive.

Keith Colburn, who fishes Alaska king crab and has appeared on the TV show “The Deadliest Catch,” said in 30 years on the water, the most dramatic weather and water changes have occurred in the last 15 years, including the three coldest years and the three warmest years in Alaska. He said 20 years ago, they might have one storm that registers 50-knot winds per year. Now they may have 10-15 storms of that magnitude.

Noting the migration of the lobster fishery out of Long Island South and north of Cape Cod, he said somewhat jokingly, “If I was a Maine lobsterman, I’d be thinking about getting a Canadian passport soon. Each of you came out here to discuss a topic no one wants to think about. But we need to think about it.” 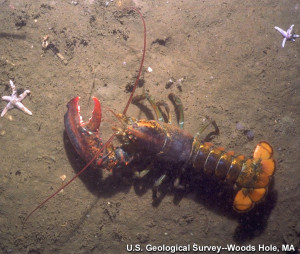 A fisherman from Point Judith, R.I. noted that their lobster fishery has been devastated by black sea bass (a mid-Atlantic species following warming waters north along the coast) and dogfish devouring larval lobsters. As regional waters warmed, more of these predators invaded the region and outnumbered the lobsters and other local species. The local fleet dropped from 150 boats 10 years ago to zero now, by his reckoning.

Scientists on the front edge of the latest climate research such as John Hare of NOAA and Andy Pershing of Gulf of Maine Research Institute highlighted just how much the water has warmed in the Gulf of Maine and how much that has impacted several native species.

Pershing noted how the Gulf of Maine is warming faster than 99% of the oceans on the planet at a rate of .23 degrees C or .4 degrees F per year, almost four times faster than anywhere else. He said because of the record warmth of the past several months allowing to El Nino, normal current variability and the recent warming trend, lobstermen could expect this year’s shed (when lobsters shed their shells) to happen anywhere from two to three weeks before the usual timeframe of the first week in July. That kind of predictability helps lobstermen at least have some idea of when their season will be most productive and profitable and plan ahead.

John Hare discussed his recent research methodology, which helps scientists, fishermen and policy makers better predict how climate change will impact growth and migratory patterns of 82 Northeast species. He said 42% of those species have a very high potential vulnerability to climate change, while 50% are likely to change their distribution because of warming waters. (See chart below).

“Warming oceans and acidification are posing a significant threat to fisheries,” Hare said. “I firmly believe we can only face these changes together.”

Which brings us back to the original question posed by chef and author Barton Seaver. He asked if fishermen could be the voice of social change at a time when politicians and scientists are often seen as bloviating by those who deny climate change exists. Perhaps fishermen, whose lives depend on the weather, could deliver a broad enough, “Everyman” appeal to spark a larger movement to minimize greenhouse gases, slow global warming and better manage the health of our oceans. Colburn, the Alaskan king crab fisherman responded, “Being that fishing is America’s oldest job, I think as fishermen we could ban together, we could start to change our patterns.”

But perhaps the question isn’t so much should fishermen be the face of climate change, but will they? As Colburn said, “A lot of fishermen want to believe that the environment is not changing.” So, getting them to sound an alarm may be a tough ask. But as the ranks of those fishermen pushed to the brink swell, like California’s Mellor, or those that found a way to adapt, like Western Australia’s Murray, perhaps there will be enough momentum for a unified voice, as Seaver suggested.

Forums like this one, uniting scientists and fishermen to understand how things are changing and how quickly they’re changing, and to work together to figure out how to adapt are significant starting blocks. And if you can get policy makers, such as John Bullard, Northeast Regional Administrator for NOAA Fisheries, to not only attend such meetings, but state publicly that we need to do something about climate change (as he did here), perhaps there is enough accountability and unity in place for us to do something to protect the climate collectively.

If we can get all of these stakeholders at the same table, working together, as John Hare suggested, we can do better adapting to how rapidly the oceans are changing, and maybe even limit the long-term damage. Doing so would help us better deliver on the Slow Food promise of good, clean, accessible and fair seafood for all.

As consumers grappling with the implications of global warming on the seafood we eat, we should understand that “eating within the ecosystem” is now more important than ever. That is, we should eat what is locally available, sustainably harvested and seasonal. Choosing “invasive” black sea bass here in Maine rather than big name species facing multiple stresses — including climate — is a step in the right direction.

Check out this column by Bren Smith, a commercial fisherman who adapted to the changing climate by embracing the “eating within the ecosystem” philosophy.

Colles did a great job engaging the students and involving them in the conversation around sustainable seafood choices. Students commented that his presentation was “eye-opening” and caused them to think about the seafood choices they make, whether at the grocery store or their favorite sushi restaurant. They especially loved the “hands-on” aspect of his presentation, getting familiar with local crabs. Highly recommend!