Getting to KNOW FISH

The spiny dogfish, abundant in these waters, showed up about two hours before guests arrived. As did the cod.

Dogfish intimidates some people because, well, it’s a shark, even if less than the length of your arm. But when chefs Evan Mallett of Black Trumpet and Brendan Vesey of Joinery Restaurant put their magic to this fearsome looking creature, the result was a perfectly battered seafood experience driven home by Black Trumpet’s Raisin Hell sauce.

That and the Pemaquid aquaculture oysters served with a tangy tursija (pickled vegetables) were just the greeting for those attending the second KNOW FISH dinner, which was held at Black Trumpet last week.

The food was fabulous, and it was an excellent backdrop for the interactive conversation about why our seafood choices matter.

As I explained why we import more than 90% of the seafood we eat in the U.S., we feasted on locally abundant and delicious cusk, which is a bottom fish that worked wonderfully in a brandade. This is a traditional Provence dish featuring salted fish, olive oil and seasoning blended into a paté-like spread accompanied by house-made baguette and kohlrabi sticks.

Cusk made another appearance as Capt. Tim Rider described the extraordinary effort just to get the fish to the restaurant that day because the weather for several days had been inhospitable for his 36-foot F/V Finlander. He and his crew left at 2 a.m. the day of the event, only to turn around shortly after leaving the harbor because the conditions were too dangerous. Fortunately, the crew was able to leave port at 7 a.m. and find enough fish for the dinner and to bring to other customers.

As we feasted on delicately poached cusk and scallop dumplings served with golden beet and green crab broth, Tim shared why he travels up to 80 miles offshore in a small boat to fish for pollock, cusk, haddock, cod and other groundfish with rod and reel. For him, the impact of trawl nets, long lines and similar commercial fishing methods on the resource and the ecosystem is devastating.

Attendees heard how the existing quota system used to manage the fishery, run like an open stock market, transfers ownership of the resource away from small-scale fishermen like him to larger operations with multiple boats. The irony is that small-scale fishermen are more likely to take care of the resource. He described efforts to increase the number of fishermen fishing with rod and reel as we dined on beautifully prepared Cod a la Provencal en Papillote (baked in paper).

Amanda Parks, Tim’s partner in New England Fishmongers, spoke of the superior quality of fish that is delivered direct, rather than passing through a series of processors and distributors in the supply chain. She shared tips on how to tell if a fish is fresh, which is crucial given that on average, seafood travels more than 5,000 miles from boat to plate in the U.S.

Black Trumpet co-owner Denise Dwinnells Mallett related a story of how she persistently asked staff at her local grocery store’s seafood counter in Maine when they would carry seafood from the Gulf of Maine. She asked until eventually, locally sourced seafood arrived. Her point? Consumers do have the power to affect change. 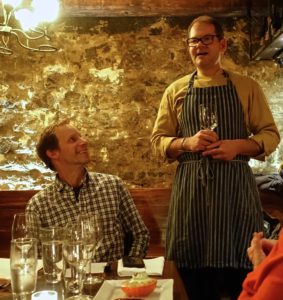 Chef Evan explained the importance of working with fishermen like Tim practicing sustainable harvest methods, and using sustainability as a guide when choosing menu options. The coconut rice pudding baked in red Kuri squash was a refreshingly sweet and colorful taste of autumn.

For the second time in a row, the KNOW FISH dinner sparked curiosity and fueled compelling conversation with fishermen, fishmongers, chefs and activists. It proved that engaging the community in intimate discussions about why seafood choices matter can increase public awareness of issues like ocean health, climate change, stock health and fairness for fishermen like Tim.

We want to continue this community dialogue in an effort to spark a groundswell of change at restaurants and seafood counters. We are looking at continuing the KNOW FISH dinner series in the spring.