Aquaculture, Antibiotics and Their Dark Path to Our Diets

“Why does that matter?”

It’s one of the first questions I get when I tell middle school students that 90% of the seafood eaten in this country is imported.

So I begin with the big picture, that much of that seafood is coming from countries that put a lot of chemicals in their seafood. Countries like China, Thailand, Chile and Ecuador don’t have the same health safety standards the U.S. does. I watch their facial expressions as I start talking about how and why antibiotics, hormones, bleach and other chemicals are used.

In just a few minutes, it does matter. They care where their seafood comes from. 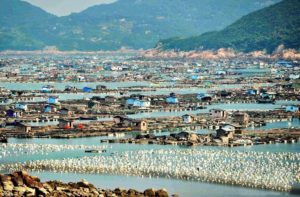 Sometimes the middle school students ask why this happens. More often though, that question comes from high school students and adults. I then explain how the FDA is outgunned simply by the fact agents only inspect 1-2% of all seafood imports. Over the past few years, I’ve watched the FDA issue more and more alerts authorizing agents to outright halt various shrimp and other seafood shipments from China, Malaysia, India and other countries because of links to US-banned antibiotics.

But the answer is really more complicated than that. Part of it has to do with U.S. consumption habits. We eat a lot of shrimp, but we don’t want to pay much for it. So the much cheaper product from Asia or South America floods supermarkets where consumers scoop it up without looking at the label or questioning the origin. 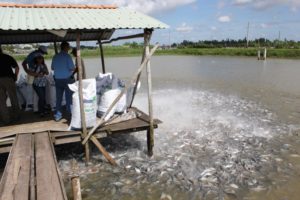 Part of the answer has to do with profit and the complex international seafood export industry. Bloomberg Business last month released an exhaustively researched, but well narrated story about this complex system. The report details how much of the seafood from China, which owns 60% of the $90 billion global aquaculture market, is shipped through other countries before arriving in the Western Hemisphere, thereby avoiding steep tariffs and close inspection (when it happens). This process is called transshipping, and it’s becoming widespread and difficult to track down, further masking true seafood origin.

I recommend reading the story if you have 20 minutes or so. Here is the link.

Here are a couple of highlights: 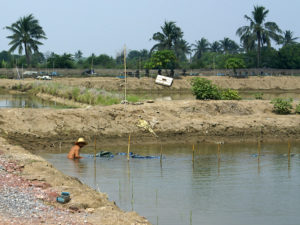 So what’s the lesson? Read labels. Ask questions. And if you can’t get seafood that is local or at least domestic to the U.S., consider other options. If you just absolutely have to have the farmed shrimp from Thailand because of the price, understand the implications … to your health and to the support of exporters more concerned with profit than customer health.

We can’t effect change in the domestic seafood web without at least first getting smarter about it.

That we can do.