Boom and Bust of Gulf of Maine Scallops

Northern Atlantic sea scallops are a good example of how fisheries management has rescued a stock from the perils of overfishing. Sadly, they are also proof of how those same policies could just as easily doom the stock in the not too distant future.

How does this happen?

It comes down to fishery access. Several decades ago, the scallop fishery in the Northern Gulf of Maine (NGOM) was teetering because the annual harvest had reduced the stock’s ability to sustain its population. So limits were put in place to reduce the overall harvest in that area.

As the stocks rebounded, fisheries managers established a new system that would guarantee smaller boat operators with specific permits to scallop in a designated area up to 60 miles off shore from Downeast Maine to Cape Cod. They were allowed to catch 200 lbs a day up until the point all of these fishermen landed a total allowable catch (determined by stock assessment), which is now 70,000 pounds.

The managers also allowed larger boats with federal permits to not only scallop beyond the 60-mile limit, but also inside the 60-mile limit. The managers said that these larger boats, fishing under what is called a limited access permit, could land as many scallops as permissible under the federal permit during a set number of days while they were in the 60-mile zone the smaller boats fish. Once the smaller boats hit their 70,000 lb total allowable catch, the entire fishery would shut down. 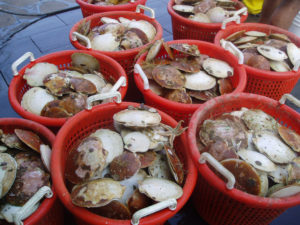 For example, in the 2015-2016 season, limited access boats caught more than 300,000 lbs of scallops in the northern gulf of Maine area before the smaller boats hit their 70,000 lb quota and the fishery was shut down.

Sound fair? No. And these limited access boats are fishing within their permitted rights. As an attorney for a lobby group representing scallopers was quoted in the Boston Globe, “These vessels are doing what they’re allowed to do.”

Here’s the worst part. NOAA projects that the current season will end with over 1 million pounds of scallops being harvested, still with only 70,000 lbs coming from the smaller boats. NOAA scientists said last year that the fishery could withstand a total haul of 400,000 lbs from this area this year.

So why does this matter to consumers?

If the stock tumbles as it did a couple of decades ago, there will be fewer local scallops and the price will skyrocket. More importantly, you should be concerned if you care about the resource and the people in and around your community whose livelihoods depend on it.

Here’s another concern. Small-boat scallopers in Maine and Cape Cod deliver a higher quality product called “dry scallops,” which have not been soaked to preserve freshness and potentially add market weight to the product. This is a common practice among the larger limited access boats. Soaked scallops lose flavor and don’t cook well. A collapse of the NGOM stocks could reduce or eliminate dry scallop availability. 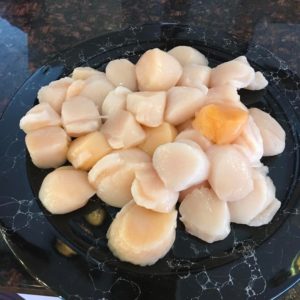 I attended a discussion about the scallop fishery at the Maine Fisherman’s Forum a couple of weeks ago, and several small boat scallopers who operate in the NGOM zone complained about seeing larger boats from New Bedford and elsewhere hoovering up all of the scallops. Their complaints hinged on two fronts: 1. The unfairness of being hamstrung by a low total allowable catch in a fishery that a NOAA scientist had claimed a few minutes earlier was strong, and NOT experiencing overfishing. 2. They worried about the long-term survival of this fishery in the face of the massive hauls taken by the limited access boats.

The NOAA staff fielding the questions were sympathetic to the plight of the small-boat fishermen. But they repeatedly said that any comprehensive change would have to come from a rule change established by the New England Fishery Management Council (NEFMC), which manages scallops in New England waters.

And therein lies the rub. The council’s mission is to protect the resource and those who use it. Unfortunately, the council can be slow to react, and it doesn’t always stand up for the access/rights of small operators.

As Ben Martens, executive director of Maine Coast Fishermen’s Association wrote in a recent blog, “The system as it is currently structured is destined to fail. User conflicts between permit types have become unavoidable since the biomass returned, and instead of putting a band-aid on this issue, the council must go through the process of fully protecting and planning for the long-term future of this fishery.”

I asked Ben what a fair solution would look like. He suggested a rule giving all stakeholders the same trip limit of scallops harvested, so one user group wouldn’t be favored over another.

The NEFMC discussed the scallop harvest and fishermen’s concerns at a meeting last November. The council will entertain recommendations from the scallop subcommittee that meets next week and possibly take action in April.

Hopefully, they can get this straight…and fast. 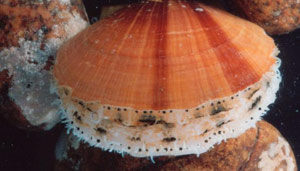 Eyes of the scallop. Photo: NOAA

I like scallops. But there is an environmental cost of dragging a 400- to 2500-pound steel cage across the ocean bottom. Bycatch is one. Disturbing the ecosystem on the ocean floor is another. Yes, some areas are more resilient than others and can bounce back fairly quickly. But there is still a consideration.

So we don’t eat scallops as often as we used to. Hopefully, we’re not forced into a situation where our local options for scallops are further limited and prohibitively expensive because our fisheries managers couldn’t find a comprehensive solution that is fair and that protects the resource.