Whose protein is it anyway? Industrial fishing and it’s global impact

When we talk about food security, we broadly mean the ability of a people to have access to healthy, affordable food on a consistent basis. This dynamic assumes that the food has been legally harvested, has not been treated with tons of chemicals and is most often the product of local farmers and fishermen. From a global seafood perspective, the approach to food security has furthered the divide between the haves and the have-nots because food security overlooks two critical aspects: scale and community control.

Sure, money dictates the conversation, but the issue really comes down to scale. Artisanal fishermen, who either fish to eat or make a small living at local markets have a particular vested interest in the health and survival of the fishery. But larger operations have a different perspective. Because of their scale, they absolutely must focus on profit. Otherwise, they don’t survive. That viewpoint often puts fragile fisheries in peril.

Take the fisheries off the coast of West Africa. Artisanal fishermen there typically harvest the migrating mackerel, anchovy, sardinella and other species passing through their waters. Unfortunately, their catches have plummeted as scores of foreign vessels have plundered their waters, scooping up millions of tons of fish illegally. A recent story in The New York Times spotlights illegal fishing off the coasts of Mauritania, Senegal, The Gambia, Guinea Bissau, Guinea, and Sierra Leone. This illegal harvest has cost these nations more than $2.3 billion in lost revenue, according to a report in the journal Frontiers in Marine Science. 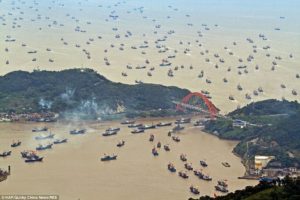 The dominant foreign fleet is not surprisingly China, whose long-range fishing fleet has swelled to between 2,600 and 3,400 vessels (depending on whom you ask), which is at least ten times larger than that of the U.S. This fleet is government subsidized to both sate China’s enormous seafood appetite (which accounts for a third of global consumption, according to the U.N.), but also to grow foreign market revenue. China owns the global seafood export market and is responsible for more than 60% of the world’s exported farmed seafood.

China’s long-range fishing vessels working off the coast of Africa have increased from a dozen in 1985 to more than 450, according to Greenpeace. Much of the foreign fishing off the coast of Africa is illegal, whether because of intrusion within the 200-mile exclusive state waters, overharvest or other violations. Like other foreign fleets fishing illegally here, Chinese vessels fly local flags. They turn off their electronic monitoring devices. They fish in Senegalese (and other country’s) waters at night. They operate off the coast of other West African nations that don’t have much enforcement infrastructure.

By some estimates, one of China’s larger boats can theoretically haul in as much fish in one week as a Senegalese boat might harvest in an entire year.

So why should we care?

This should get our attention for several reasons. First, as foreign fleets deplete fish stocks off the coast of West Africa, they’re pushing small scale, artisanal fishermen out of business. Worse, they’re driving steep fish price increases in nations where food is already scarce in many regions, even as coastal populations increase. 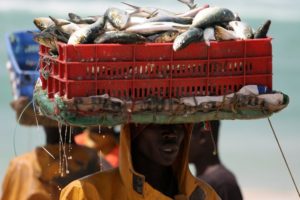 Many of the migrating anchovy, mackerel and sardinella harvested there are ground up into fishmeal in processing plants in nearby Mauritania and elsewhere and sold to feed farmed shrimp, tuna and salmon (as well as pigs and chickens) shipped around the world.

Sadly, those fish fill much of the direct protein needs of people in coastal West Africa (as well as developing nations around the world). According to the UN Food and Agriculture Organization, seafood accounts for 20% of the protein intake of more than 3 billion people. In Senegal, those fish account for more than 40% of the country’s protein intake. A recent study states that 90% of the huge global harvest of these types of small oily fish could be consumed directly by humans rather than ground into fishmeal.

This is a regional food sovereignty issue because coastal Senegalese fishermen have little control over the massive Chinese fleet harvest that is taking their resource. This over-harvest crushes local communities and sends shock waves through global markets.

Here’s the kicker for U.S. seafood markets. That 90% of the seafood eaten in this country is imported has become a widely cited statistic. If China is by far the world’s largest exporter, and we import 90% of the seafood we eat here, there’s a damn good chance that the frozen fish sticks, farmed shrimp and salmon sold in supermarkets here are the byproducts of this illegal fishery off West Africa.

Again, the profit margins to feed higher priced farmed salmon and shrimp to the more well-to-do at the expense of the cheaper more readily accessible protein for the coastal impoverished seems a Faustian bargain. This type of “ocean grabbing” is global in scope and threatens the health of vital fish stocks as well as the lives of the people that depend on them.

Now think about small-scale fishermen in the United States, trying to earn a living, mostly complying with regulations and caring about the resource because their lives depend on it. Our markets are jammed with cheap, imported seafood, much of which is harvested in similar circumstances as mentioned above. And this seafood is pushing down market prices here because of its volume, making it harder for small-scale fishermen to compete.

Some communities are fighting back against “ocean grabbing” by finding ways to gain local control over their fisheries and re-establishing their food sovereignty. Here is a link to The International Planning Committee for Food Sovereignty that is providing small-scale food producers and local organizations the infrastructure and guidance to strengthen their local markets.

What can we do about it?

Here are a few steps people can take in their personal lives to support local seafood systems and community fisheries: