I don’t know if it was Queensryche, Dokken or Whitesnake. Whatever flavor of 80’s hair band, the music was pulverizing my ear drums. As they pulsed laterally, the fluid in my ears splashed up and down every time the bow of the boat jumped six feet and plunged back down on the back side of a wave, punctuated by the incessant hammering of the kick drum in the background.

What were we doing?

I was heading out to the Shoals Marine Laboratory on Appledore Island off the coast of Portsmouth, N.H. to talk with some students from the University of New Hampshire, Cornell University and Carleton College about regional, domestic and global seafood markets, consumer choices, market influences and climate change impacts. The students were participating in a two-week intensive sustainable fisheries course coordinated by N.H. Seagrant. I was riding with Capt. Tim Rider, whose fondness for that particular XM station was amplified by the conditions. 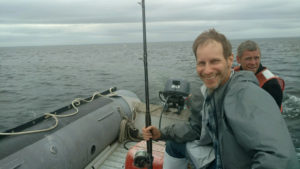 June in New England. Heading to the lab in wind-driven rain, but fortunately out of the six-foot waves … and the music. Photo: Tim Rider

If you’ve ever attended one of the KNOW FISH dinners, you know Tim is very passionate about what he does: bucking the trend toward high-bycatch harvesting by fishing for groundfish in up to 500 feet of water 80 miles offshore with rod and reel. And he’s not shy about sharing his feelings on current management policies, consolidation of the fleet (forcing small-scale fishermen out) and the need for change.

Perhaps it is this passion and willingness to speak out that has alternately cast him as either a pioneer striving to do the right thing against many odds or a loud-mouthed maverick who refuses to get in line. Perhaps that’s why he’s been lauded by restaurant chefs and consumers for the quality of his product, and vilified – even threatened – by others in the industry who don’t share his views.

That passion, along with a lifelong obsession of fishing and the experiences he’s had trying to survive make for a compelling, if a bit incessant, narrative. He keeps on talking, he says, because he has a lot to say.

The unsuspecting students at the Shoals Marine Laboratory heard stories of being shut down from speaking in New England Fisheries Management Council meetings, excessive and unfounded accusations from law enforcement, and confrontations with other fishermen who don’t like him rocking the boat. 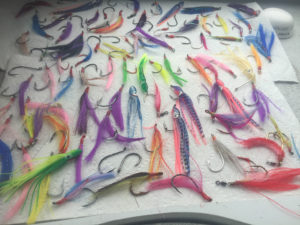 “Bait,” or the tools of the trade.

He provides a firsthand account of how the current management system has pushed him to the brink of bankruptcy multiple times, even as he’s trying to support his wife and young son and his crew. He talks about the money trail that has played a significant role in dictating fisheries management policy, including controversial catch shares.

Set up to allow fishermen to self-regulate by creating a marketplace for access to different fisheries, catch shares have spawned a money-driven resource grab in which access is bought and sold like stocks. The result is now an unfair system that too often privatizes the resource at the expense of small-scale fishermen who don’t have the money to buy quota or to compete in the limited fisheries allotted to fishermen with no specific quota.

Tim has joined a sector, or group of fishermen with quota, that is primarily “geared” toward fishermen using hooks rather than nets. The hope is to work collectively to promote low-impact fishing and perhaps gain a stronger voice during council meetings. 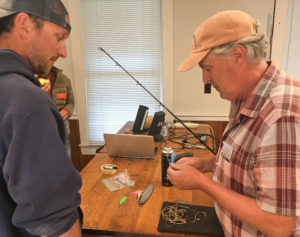 And for as many stories Tim told, the students on Appledore Island were engaged. They asked pertinent and insightful questions. They wanted to know about possible management solutions. They even laughed at some of his jokes.

Most importantly, they took advantage of a special opportunity to speak with a fisherman who gives his blood and sweat 12 days out of 14 (sometimes more than that), leaving the dock at 1 a.m. and returning at 9 p.m. because he believes in what he’s doing. 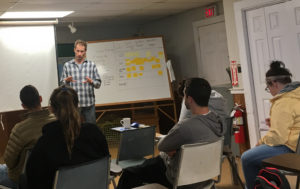 Talking about how consumer habit driven by price and convenience have opened the flood gates to cheap seafood imports. Photo: Owen Nichols

The students also asked smart questions about the big picture of local, national and global seafood dynamics. While Tim pointed to access and quota as two of the biggest issues with fisheries here, I added habit: Policy maker habit in keeping a faulty, skewed system in play; and fishermen and operator habit to own the most quota and to resist change for obvious reasons.

And worse still: Consumer habit. One of the most significant drivers for the amount of imported seafood eaten in the U.S. is consumer choices, dictated largely by price and convenience. We discussed how getting smarter about seafood systems and how to get closer to the domestic source (local fishermen) is crucial to changing that dynamic. 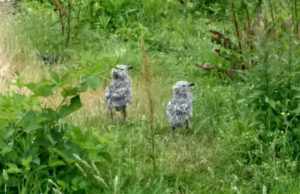 As a annoying as the adults can be, seagull chicks register high on the cute scale. At least we didn’t get attacked by the mamma. Photo: Tim Rider

We also talked about climate change and its impact on everything from native and invasive species to ocean acidification and changing currents. We talked about the need to keep diving into these issues and pursue careers in marine science, climatology, ecology, etc. to help solve some of the complex challenges climate change presents.

Students thanked us for coming and talked about some of the projects they were working on and their planned study focus in college. 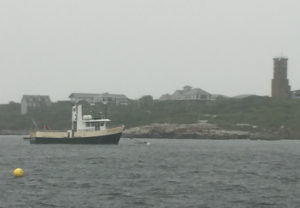 Departure, before the fog really set in.

On the ride home, as the grey skies grew darker into dusk and the bow bobbed to the pounding beat of blaring rap music, Tim and I remembered why we took a full day off to plow through some fairly gnarly weather and talk to a handful of college students from across the northeast.