NOAA Opens Door to Aquaculture in the Gulf of Mexico

It’s no surprise this announcement encountered swift and unyielding opposition from environmental groups, land-based aquaculture groups and commercial fishermen. Why?

Let’s start with the basics.

Environmental groups argue offshore aquaculture operations do significant environmental and ecosystem harm that not only affects water quality, but the health of myriad plant and animal species in the vicinity. For example, they cite studies of finfish operations that crowd fish into pens raising the probability disease will spread to wild native species outside of the pen. They also cite studies showing how these operations use antibiotics to treat disease outbreaks, and hormones to accelerate growth, posing unforeseen health risks to other organisms and humans. 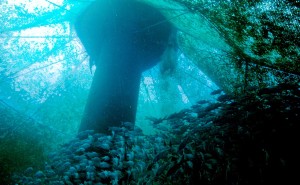 They point to ecosystem damage in the form of aggregated feces and undigested food pellets that pile up under pens (potentially altering the nitrogen and other chemical composition of the bottom). These shifts can create inviting conditions for harmful algal blooms that ultimately lower oxygen amounts in the area. Fish escapes are another problem environmentalists note, risking potential interbreeding with wild fish and thereby weakening the wild fish DNA. Others decry the vast harvest of forage fish (herring, sardines, etc.) used to make fish oil and pellets for food, potentially straining a very critical food source for larger species like tuna.

NOAA attempts to address these issues, and many others, in the final rule posted yesterday.

And those explanations have not convinced me this is a good plan. First of all, the concept of suspending net pens or any similar structure for raising finfish in the Gulf of Mexico is short sighted. I grew up in New Orleans. What kind of preparations can anyone make to secure such structures if a hurricane comes through?

Secondly, I’ve seen no compelling, credible studies that effectively refute environmental/ecosystem concerns over open ocean finfish aquaculture. The rule suggests that stakeholders (read fish/shellfish farmers) should conduct the initial “baseline environmental survey” when applying for the permit. So NOAA is asking permit applicants to determine what impacts, if any, their operations will have on the environment. How objective will that be? What would trigger a separate, NOAA backed assessment?

One of NOAA’s counterclaims regarding forage fish used as food is that this process has “decreased in recent years” as alternative feeds including “soybeans, barley, rice, peas, canola, lupine, wheat gluten, corn gluten, algae.” Using alternative feeds is a good thing as long as those feeds provide the right nutrition to the fish, and as long as the process to make them doesn’t damage the environment. I’ve seen studies suggesting feeds based on soybeans actually reduce beneficial Omega 3s and increase inflammatory Omega 6s, while wild fish eating their normal fish-based diet have good levels of Omega 3s.

Aquaculture is certainly a divisive issue. On the one hand, you have private operations looking to make money while ostensibly reducing demand on wild stocks. Their “altruistic” mantra is that they’re not only combating overfishing, but hunger. On the other hand, you have environmentalists who fret over habitat, ecosystem and natural impacts, and commercial fishermen who fear both economic loss and damage to wild stocks. A couple of environmental groups have said they’re considering possible legal action in response to the NOAA rule. 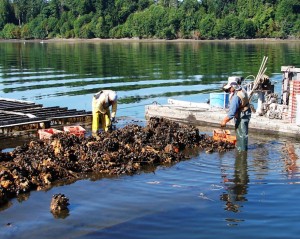 As with many sustainable seafood questions, I see no black and white answer here. Land-based re-circulating systems address some of my concerns regarding finfish aquaculture. Properly sited and managed re-circulating systems minimize these impacts by re-circulating clean water through closed tanks that do not impact surrounding plants, animals and watersheds. There are still some potential issues, but nothing like large-scale open ocean pens. Similarly, small-scale, actively managed finfish operations that don’t use hormones or antibiotics and don’t overcrowd pens also reduce environmental harm.

Bivalve farms, raising oysters, clams and mussels, have minimal adverse environmental impacts as long as the sites are well situated in good current, and the farmers prevent overcrowding. In fact, because of their natural filter feeding, bivalves can actually clean out bays and estuaries.

Two small reasons for optimism: First, that NOAA acknowledges that open ocean aquaculture requires management to prevent unfettered, unmonitored farming to the detriment of environment and coastal communities; and second, that genetically modified organisms are explicitly banned from any aquaculture operations within the management plan.

I don’t know whether this new rule will open the door for open ocean aquaculture operations in other U.S. regions. I do know that if/when more regions begin to develop and approve management plans for aquaculture, more groups will voice their concerns and opposition.

I only hope that the industry and NOAA will pay more attention to those concerns and work more diligently to minimize the impacts. Otherwise, the precedent may tip the ecosystem balance against wild species.