One Seafood Conversation at a Time

One conversation at a time. That’s been my mantra for changing the seafood purchasing dynamic in the U.S. Whether I’m speaking with a 76-year-old retiree sporting a blue blazer, a group of AP Environmental Sciences students or a cluster of six-year-olds anxious to get their hands on some live green crabs.

The question comes up occasionally. “How do you keep your content fresh?” It’s a good question. A lot of the eye-popping statistics don’t move much year after year. More than 50% of the seafood we eat is farm raised, and 90% of the shrimp we eat is farm raised. The fact remains, sadly, that at least 90% of the seafood we eat here is imported. Some argue the percentage is actually 91 or 94. Either way, the number has not gone down, and it isn’t likely to change substantially in the next few years unless we have some significant policy changes.

For me, it’s not the numbers that change so much. It’s the people I’m speaking with that change. I want to democratize the message. Reach as many people as I can. Tell them the story. Answer their questions. And hopefully convince them to take those messages with them so they change their buying habits and spread the word.

Each new face or group of faces is an opportunity to spread that message. And I’ve found the most effective way to ensure the message resonates is to adapt the way I tell the story to the audience. So the method of the story telling changes too.

This varies dramatically between classrooms by age and subject and also between different restaurant demographics I may be engaging. I look at each new “audience” and venue as a challenge. How do I connect? How do I engage? How do I get them to own the conversation so they own their next seafood decision? 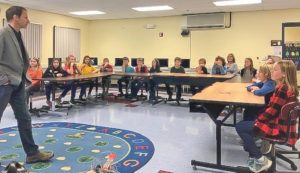 Rye Elementary fifth graders catching on quick that they have the power to ask smart seafood questions at restaurants and stores. Photo credit: Jennifer Halstead

I thought of these questions, as I always do, prior to a couple of school visits last month. Part of my preparation involves strategizing with the teacher beforehand about where the students are in their curriculum and what messaging would best fit with what they’ve learned or with what they will learn.

I’ve established relationships with several teachers who know what to expect. I still check in with them beforehand to make sure there aren’t any new messages they want me to introduce, or advise them of some new content or props (live mackerel, gear, etc.) One of these teachers is Doris Gianforte, a 5th grade science teacher at Rye Elementary School in New Hampshire.

As usual, when I met with her students, they were well prepared. They wanted to know more about why we import so much seafood, and why green crabs are such ecological monsters on this side of the Atlantic, and not in Europe. They couldn’t wait until they had the opportunity to ask questions at a restaurant.

Prior to my visit with 7th grade students at Harpswell Coastal Academy in Maine, I had a good discussion with their teacher Sarah Crockett. We talked about how they were in the middle of field lab work on green crabs in conjunction with an education program at Gulf of Maine Research Institute.

So we discussed introducing green crabs as a climate change marker, one that has implications for local ecosystems and shifting predator/prey relationships.

These students were also very well prepared, accurately talking about when and how European green crabs were introduced in US waters, what they like to eat and why they’re so destructive. 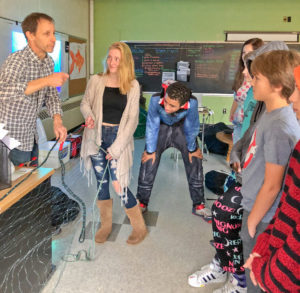 Students asked great questions about what fishermen and researchers are doing to minimize bycatch associated with different gear types. Like most students, getting their hands on some trawl net and a turtle excluder device helped them better understand efforts to reduce turtle bycatch in the Gulf of Mexico shrimp fishery as well as other fisheries.

These types of connections give me hope that change, real fundamental change, lies within the possibilities and ideas sparked by these conversations.

Even if it’s one at a time.