Sometimes it’s tough to see the forest through the trees. Or in this case, effective fisheries enforcement through the quagmire of domestic fishing regulations.

Consider that laws established to ensure responsible harvest, proper trade/market practices and truth in advertising throughout the supply chain are enforced by at least four different federal agencies with different agendas, priorities, authority, funding and resources. Factor in state and local agencies involved in the process, and you’ve got layer upon layer of bureaucracy. And yet, there are still gaps.

This is why we conducted the Slow Fish 201 webinar: Building Accountability in Seafood Weds. Jan. 23. We wanted to shed light on this complexity and the challenges it presents as well as some innovative thinking on how to create markets that organically root out fraud (more on that later).

In broad terms, the National Oceanic and Atmospheric Administration’s Office of Law Enforcement has jurisdiction over seafood entering the U.S., and can conduct warrantless inspections on vessels as they enter US waters. But it does not have the same broad authority once the seafood has crossed the border. The Department of Homeland Security’s Customs and Border Protection also has some authority to inspect and ensure proper labeling of seafood entering the U.S.

Once seafood has passed beyond US borders, the responsibility to enforce labeling, country of origin, food safety and related laws generally belongs to the Food and Drug Administration and to a lesser degree, the US Department of Agriculture (primarily for farm-raised seafood). There are of course, exceptions to these rules where, for example, NOAA does have some jurisdiction on product within US borders (which makes the situation all the more confusing to those in and outside the supply chain.

With all of these layers of protection, intelligence and resources, you’d think we’d have a good handle on fraud.

And still, less than 1% of the seafood we import in this country, representing some 90% of domestic consumption, is inspected. That doesn’t even account for what happens within the domestic seafood supply chain, such as the co-optation of core trusted values, as happened with the Sea To Table news last summer.

No wonder consumers, fish harvesters, retailers and everyone else in the supply chain is confused and likely frustrated. How do you keep tabs on all of that?

Patty Lovera, food and water policy director for Food & Water Watch, has spent decades navigating the domestic food policy system. She began the webinar with a high-level view of the matrix of federal agencies and laws responsible for safeguarding the stream of seafood in the supply chain. In short, the very Jenga-like structure leaves many gaps in enforcement, too much room for interpretation and hence, exploitation, and some confusion among supply chain players about how to honestly comply with the law. 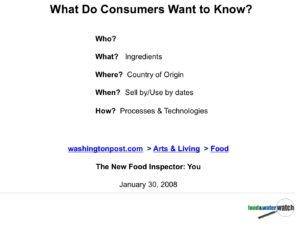 As Patty Lovera mentioned and others echoed, consumer education is critical in the seafood supply chain.

She presented the Certified Organic label as a cautionary tale when laws and values don’t gibe. Established to distinguish farmers who adhere to a set of standards that prohibits hormones, antibiotics, certain pesticides and other additives and destructive practices, the label became a battle cry in the conflict with huge multinational corporations seeking to own the food system.

Millions of dollars, countless hours, political wrangling, lawsuits, arm-twisting, scheming and in some cases, outright capitulation have led to a severely diluted label bearing no resemblance to the original mission. More than three decades of haggling, and products either owned or supported by the likes of industrial agriculture giants Monsanto, Dow Chemical and Tyson foods bear the Certified Organic seal.

The message? Labeling schemes and the values they promote can be co-opted if not rooted in strong values backed by stronger laws.

We were fortunate to have Congressman Jared Huffman (D-Calif.) join the conversation. He’s quite busy as he’s just taken the gavel for the powerful House Natural Resources Subcommittee on Water, Oceans and Wildlife, which is responsible for reauthorizing the Magnuson Stevens Act (MSA), otherwise known as the Fish Bill.

“I believe we’ve got to be supporting U.S. fishermen in an increasingly competitive international market.”

In outlining some of his priorities for the subcommittee, he said we need to preserve the health of the oceans, fix some of the environmental rollbacks established by the current administration and do what is necessary to help U.S. fishermen make a good living. “I believe we’ve got to be supporting U.S. fishermen in an increasingly competitive international market,” said Huffman.

He also mentioned “…ways to improve traceability throughout the supply chain. There may be new technology that could be utilized, examples from businesses that are doing some of this work. It’s clear to me that we need to better enforce, maybe even strengthen, existing policies to ensure accurate labeling, increased transparency and consumer trust.”

Noah Oppenheim, executive director of the Pacific Coast Federation of Fishermen’s Associations and the Institute for Fisheries Resources, followed on that theme, saying that fraud has a significant impact on community-based fish harvesters who are trying to abide by the law.

“It’s only fair that the accountability that fishermen have been holding themselves to is rewarded in the marketplace.”

“Fraud can occur at any place in the market,” Oppenheim said. “It’s a huge problem, and we have to find comprehensive solutions that make it harder for anybody on the end of the chain of custody to mislabel or fraudulently market their product.”

He also spoke of the need to enhance education and marketing to help consumers better understand the value of domestic fisheries. “It’s only fair that the accountability that fishermen have been holding themselves to is rewarded in the marketplace.”

She zeroed in on increased funding to boost the infrastructure at our ports to level the playing field between domestic seafood standards and standards for imports. “As long as it’s easier to bring seafood into port in a container than to bring it in your fish holds, we are doing our seafood industry, our fishermen and our citizens a disservice.”

“As long as it’s easier to bring seafood into port in a container than to bring it in your fish holds, we are doing our seafood industry, our fishermen and our citizens a disservice.”

Hathaway also proposed “encouraging region- and fisheries-specific solutions to the problem beyond Magnuson.” One such approach, in her view, would be to provide funding for test programs to track seafood from boat to plate in different regions. While some programs exist, she would like to see more cooperation and investment in such programs, rooted in common values across different supply chains and geographies.

One of the webinar’s recurring themes hinged on supplementing better, more comprehensive enforcement of stronger laws with cultural changes within the fishing community. As Hathaway suggested, “Federal legislation is rarely a panacea for every issue in fisheries.” However, one possible path toward ensuring stakeholder buy-in while potentially reducing fraud involves a community accountability model.

Kevin Scribner, owner/operator of Forever Wild Seafood and one of Slow Fish national’s team leaders, described the notion of creating a seafood community accountability program, in effect, a cooperative rooted in a shared set of values. If you agree to uphold the values, you become part of the community that will support those values, identify and address any violation of those values (fraud), and offer support to those who need it.

This type of community accountability promotes a self-policing model that discourages any missteps while promoting the values that engender public trust. Scribner described it as a system in which “We take care of and manage our own.” But it would also be a system that is open to anyone willing to embrace the core values, which may be similar to the Slow Fish values of good, clean, fair, and/or the Local Catch Core Values embracing community-based fishermen.

“…a reliable trusted knowledge-based system of accountability can be developed and maintained by a seafood community that is committed to and guided by core values.”

“We have confidence that with the proliferation of direct and immediate communication tools plus refined methods of traceability and a commitment to transparency, that a reliable trusted knowledge-based system of accountability can be developed and maintained by a seafood community that is committed to and guided by core values,” Scribner said.

A seafood community accountability framework would not seek to rebel against nor replace existing federal, state and local laws in place. Rather, it would operate under the umbrella of existing fisheries laws, augmenting the overall effort to minimize fraud while uplifting the values that support responsibly managed fisheries.

There’s much more to discuss on this topic, including different values and traceability and transparency technologies to support those values, all of which we’ll revisit in the third webinar in the Slow Fish 201 Webinar Series on Feb. 27. Stay tuned for more information regarding time, panelists and questions to be asked and answered.

The webinar closed out with some insightful questions from the audience regarding fair pay for seafood processing employees, economic justice to ensure fair pricing and access to quality seafood for all demographics and ways to measure success in the mission to uphold values and minimize fraud.

We will revisit all of these topics in some form in one of the following webinars.

If you’d like to continue the discussion, visit the Local Catch Forum here.

If you’d like to communicate directly with one of the panelists, send an e-mail to colles@onefishfoundation.org.

Want a more in-depth understanding of the federal agencies at work against seafood fraud? Follow these links: