The Story of Seafood

Despite all of this planning, sometimes things change last minute and you have to adapt. It’s an almost everyday occurrence in the restaurant industry, particularly when you strive to be farm- or boat-to-table.

And so I found myself shucking a few dozen oysters at Tinos Greek Kitchen less than an hour before guests were to arrive last night. As often happens, Mother Nature dictated a deadline change when it dumped heavy rain on Great Bay on the Piscataqua River over the weekend, forcing the state of New Hampshire to close the bay to shellfish harvesting the day before the event.

We scrambled to get some Gulf of Maine oysters, and processed them just in time for dinner. It became a great talking point about eating with the ecosystem (ie, adapting to what’s available and what Mother Nature allows). Fishing is no exception. Capt. Tim Rider of New England Fishmongers, who provided the fish for the dinner, will tell you change is a constant. He could find pollock in the same spot three days in a row in 300 feet of water 60 miles offshore. But on the fourth day, the wind is cranking at 30 knots with eight-foot swells and his boat, the F/V Finlander, stays docked. On the fifth day, the fish have moved out. 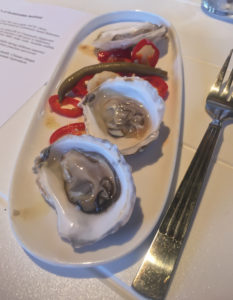 At the dinner, we discussed the importance of eating what’s locally available, abundant and in season. For example, squid are cruising in numbers in the Northeast Atlantic. Chef Mark Segal and his team prepared wood grilled squid (from the F/V Rimrack out of Rye, N.H.) with roasted eggplant, roasted red peppers, crispy smashed chickpeas, olives, pepperoncino, feta, egg breadcrumbs and green crab aqua pazzo. Fabulous. The plates went back to the kitchen scraped clean. 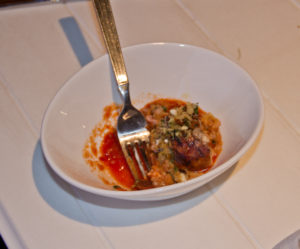 The menu itself testified to the narrative of eating what’s local and fresh. The fourth course was listed as “Local Whitefish al Forno” because Chef Mark prepared the menu not knowing which groundfish Capt. Tim would bring in that day. The pollock, which was fired to the perfect temperature, texture and taste, was served with finnan haddie (cold smoked Finlander haddock) risotto, English peas, fiddlehead ferns, and hen of the woods mushrooms. Stellar. 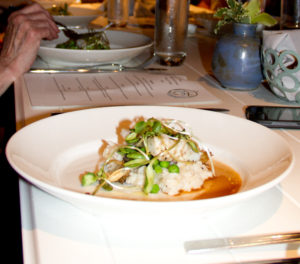 We discussed how every dish has a story, just as every piece of seafood we purchase has a story. The story tells where, when, how and by whom it was harvested. The question is whether we can get that story before we buy; whether we can believe that story; and what that story actually is. Because U.S. seafood consumption is so disproportionately skewed toward cheap imports (more than 90% of the total seafood consumed domestically), finding the truth behind the seafood requires vigilance from consumers. They have the right to find out these stories so they know what they’re eating. 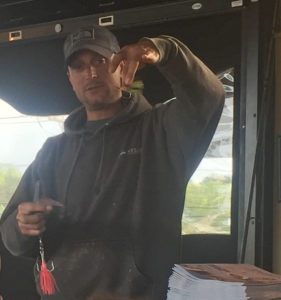 Capt. Tim rider displays a heavy jig and the type of fly used to catch groundfish, like the pollock on the menu. Photo credit: Ed Marshall

The Snow Island Oysters I helped shuck were from Quahog Bay in Harpswell. The Quahog Bay Conservancy seeded the oysters for aquaculture a few years back in an effort to help clean the bay. As filter feeders, oysters remove some of the excess particulate matter like plankton and nitrogen that could choke the bay with harmful algae if left unchecked.

On the theme of adaptation, I urged attendees to re-think how they approach seafood purchases by taking a more active role in discovering the story behind the seafood. As with previous KNOW FISH dinners, we printed some sustainable seafood principles, called the 7 C’s of Sustainable Seafood, on the back of the menu. I encouraged them to take those concepts with them the next time they go to a seafood counter or a restaurant. Buying local is like making a covenant with local fishermen: “I trust you to provide good, sustainably harvested seafood. You trust me to pay a fair price.” 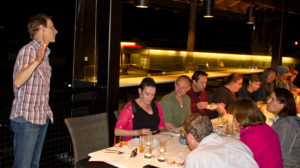 Capping the evening with a mission to spread the word over an inventive, and very satisfying dessert. Photo credit: Mike McGrail

Doing so likely supports fishermen like Capt. Tim Rider, or oystermen like Steve Weglarz of Cedar Point Shellfish and Brian Gennaco of Virgin Oyster, Co., who were both on hand to discuss local oyster aquaculture.

I asked everyone at the table to channel the energy from the event into conversations they have in their communities. Changing a broad national dynamic such as how we buy seafood in the U.S. happens at a grassroots level by spreading the message as often, as loudly, and as passionately as we can.