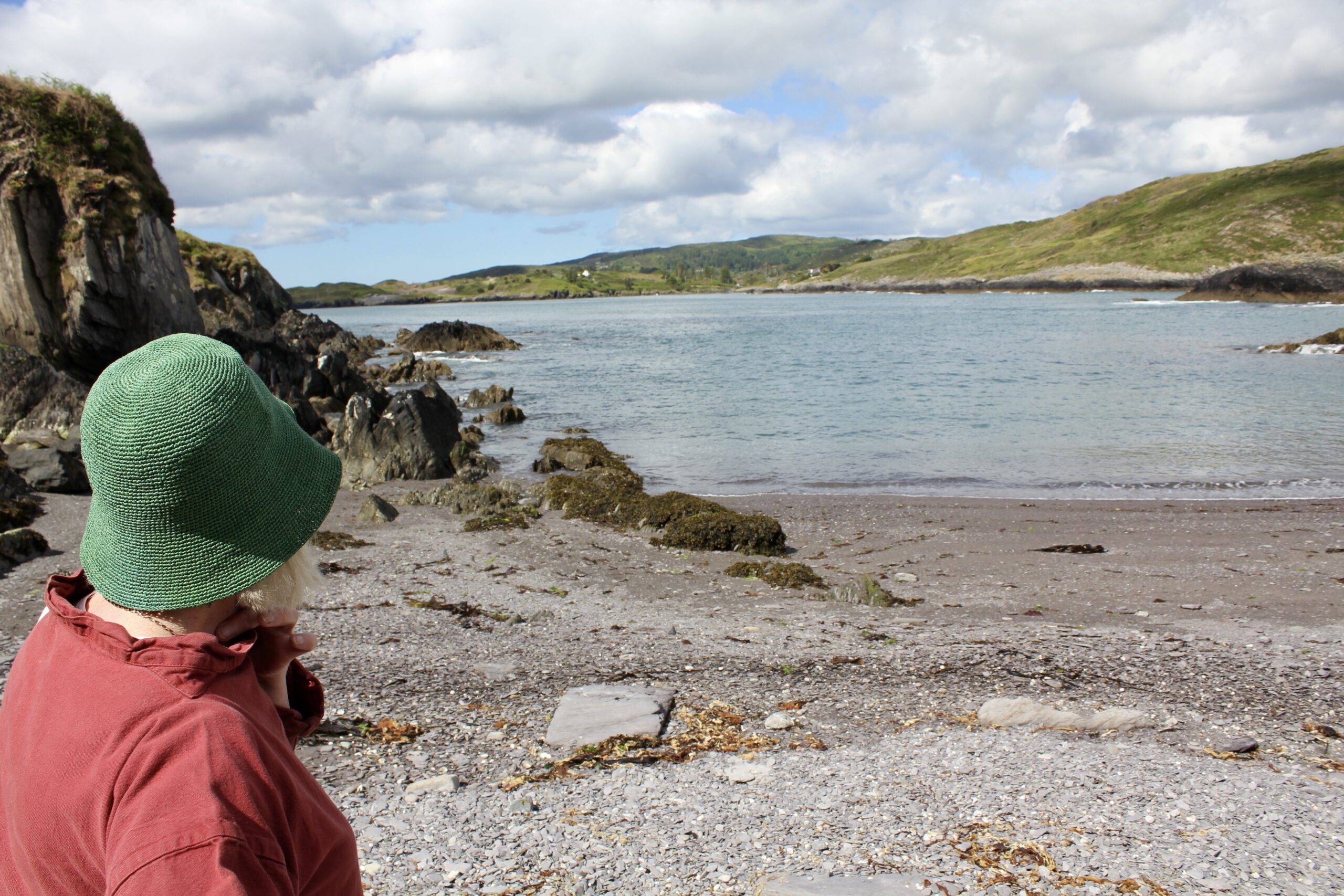 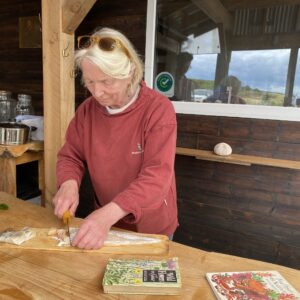 Early summer this year was dry in West Cork. Drive just an hour east and the hills were dripping with rain, the sky hanging heavy over the cliffs that would soon fill with crowds from the bank holiday. But in West Cork, the fields were only deceptively green. A paler green, worn down only where cows had passed in too large numbers, tractors following in their footsteps spraying the dry, rainless air full of a mist that choked Sally’s bees. Not her bees, really, but they came to her garden: her little wild corner of West Cork amid manicured pasture. Nettle clumps, crooked apple trees, and grass reaching its lichen-covered branches. The seemingly last wild patch, to smoke the last wild salmon.

I first met Sally Barnes over a Zoom call in late 2019 as I worked on a research project about the few remaining Irish smokehouses that still use wild fish. Today, due to the rapidly diminishing wild fish stocks, Sally is the only one who exclusively uses wild fish for her products. She uses her business and proximity to the practice of catching and smoking wild fish to advocate for the protection of not only the species but also the people who have deep economic and cultural connections to fishing them. We would chat regularly over the next couple of years and I became increasingly drawn into the world of fish smoking on the west coast of Ireland. Finally, in June this year, I had the chance to travel to her corner of Southwestern Ireland and meet her in person. 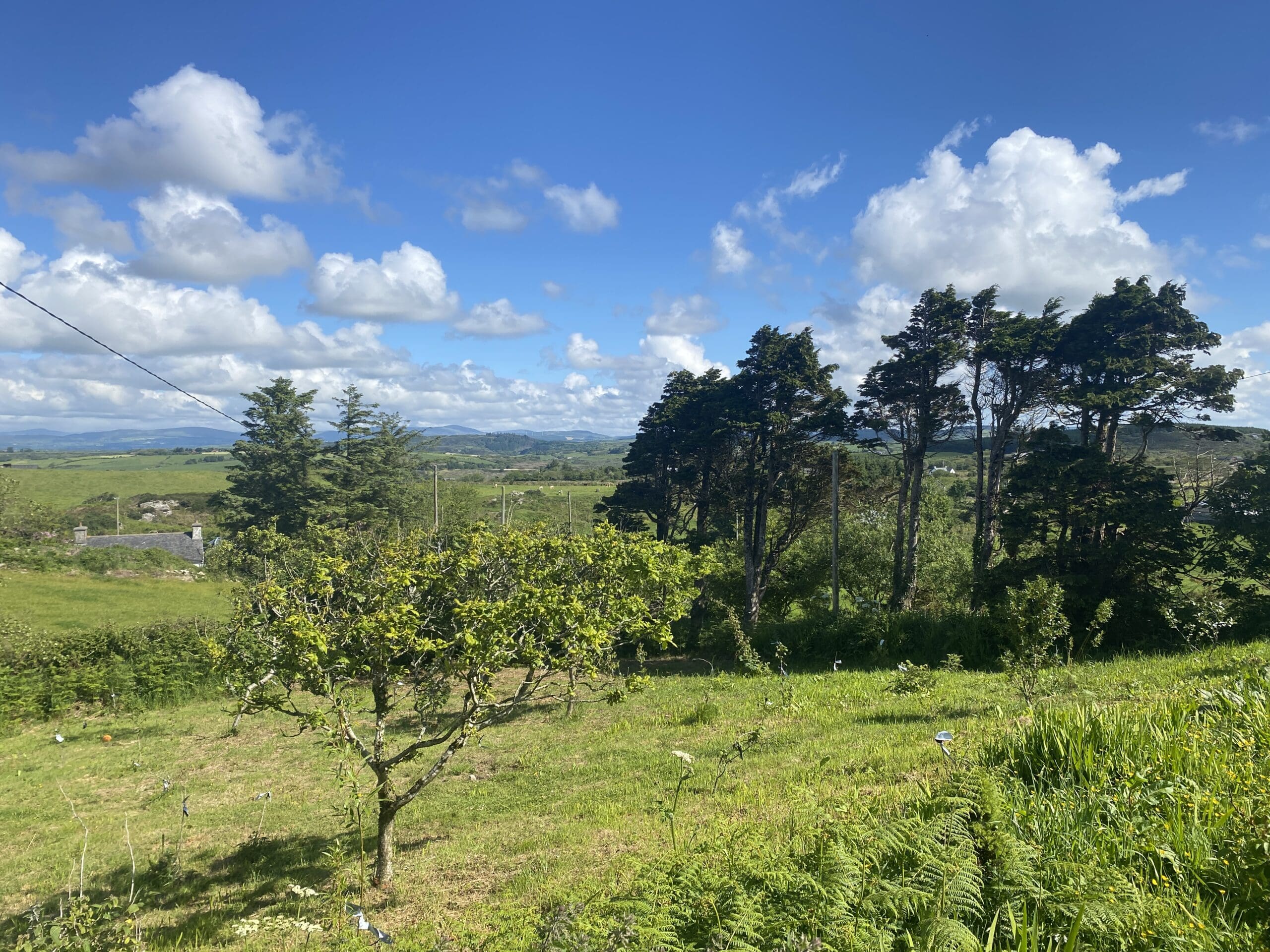 Sally began smoking fish through trial and error in the early ’70s when she and her then-husband were given a small kiln in exchange for lost payment on a catch. Partly out of intrigue, and partly out of necessity when money was tight and with two young girls to raise, she began to teach herself the careful balance of salt, smoke, and fish.

To visit her shop I drove along coastal roads through expansive cow fields until I came across a small wooden sign that pointed me up a dirt road and past a cow barn. While this felt like the end of a long journey to finally meet her and taste her smoked salmon, I was there to take one of her newly developed courses on coastal foraging. Like smoking fish, economic necessity also drew Sally to foraging and learning to find food in the rich coastal landscape near her home. That necessity and a dedication to keeping at least a corner of her adopted-country wild spurred her business and activism over time. In the past few years, her business, mission, and impact have expanded, in part due to her collaboration with a man named Max Jones.

Max has dedicated the past several years to learning as much as he can about traditional food preservation from the Italian Alps to this particular corner of Ireland. He arrived at Sally’s shop to learn her process of smoking fish, but he soon realized that when she decided to quit working, all of her knowledge and connections could disappear. He’s worked with her over the past few years to help share her decades of knowledge – not just of the fish that swim in Irish waters, but also of land, plants, and the community around her – and the two of them began to lead classes and workshops.

When I arrived at her shop, I was welcomed with a cup of coffee before we piled into her car and drove a few miles down to an empty beach. As we walked along the cliffs that rose up around the beach, Sally began to point to the plants growing out of the rocks and clay, naming each of them and telling me a bit about how to harvest and cook them. We found the small narrow leaves of plantain, the thick and shiny sea spinach leaves in massive bunches, and mugwort growing in tall stands sprouted up around the end of the road. We picked handfuls of each and moved on to the next cove. As we drove, we’d stop and look out over the water, Max remarking at the incredible knowledge the local fisherman had of each bay and the underwater world that we couldn’t see – but that was so familiar to everyone in the area. Generations have fished these waters. Today, fishermen harvest less and less from them as Ireland moves toward building massive fish farms up and down the coast. With this transformation, local knowledge of fishing practices is at risk of disappearing, as is the knowledge of how these waters move and shift and the multitude of food sources in and around them. 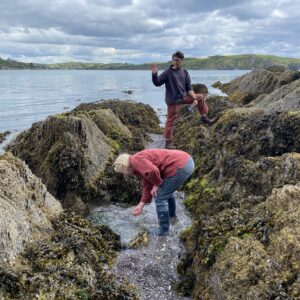 We stopped at another cove, passing a crumbling church with red valerian growing from its sides. A family was already there, the two sons and the father out in a small wooden boat fishing while their mother and grandmother sat on the sand with their baby. They watched us as we walked out onto the rocks lining the cove, looking into tidepools in search of pepper dulse. With a distinct taste of truffle when eaten fresh, it’s often called Truffle of Sea. Dried and ground up, it makes a nice spice to sprinkle on top of a meal for a little extra umami flavor. We cut some carefully from the rocks and walked back to the car. Sally struck up a conversation with the two women sitting on the beach as we passed them again and they asked about the seaweed we’d collected. They tasted it for themselves, in awe of the unexpected flavor that grew in a thick coat on the rocks all around them that they’d never tried before.

In writing about the recipe Max has shared with us, he says: “The point of the coastal harvest course is to get people to look at wild food not as “foraging” to find weeds with which one can garnish a salad, but rather look to the wild as a source for true sustenance.”

Foraging is not only an act of curiosity for so many of us, including Sally, but it is a means of survival – both for our own families and our intergenerational connection to the land and ocean.

Just as working with wild fish is an essential step in protecting them from disappearing, sharing her knowledge of working with local species is a necessary part in Sally’s efforts to keep them alive. She works closely with the few men who still catch wild fish just a few miles from her shop, and welcomes visitors from around the world to learn from her.

I’d come here not just as a visitor from New York but as someone raised on the Pacific. I grew up along a coast with vastly different plants and animals than West Cork, but I was drawn to any chance to learn more about how we can create a stronger connection to the land around us through learning how it can feed us. I had only a few chances to learn about my local landscape and wild plants growing up, but even the little ecological knowledge that I do have feels powerful. It’s as if I know a secret to my autonomy.

Back home, on both coasts, it is an ongoing struggle for Indigenous communities who have foraged along the coast since time immemorial to continue to do so. Through pure perseverance and despite all odds, the knowledge of what the California coast can provide hasn’t been lost, but it continues to be threatened by laws that separate us all from it. Sally’s work is deeply rooted in the place she lives, but she understands that the struggles she and her community face are part of a global effort to protect our natural resources. For Sally, as for other coastal communities working to maintain subsistence fishing and foraging practices alive, our food is our connection to our land and our past just as much as our survival into the future.