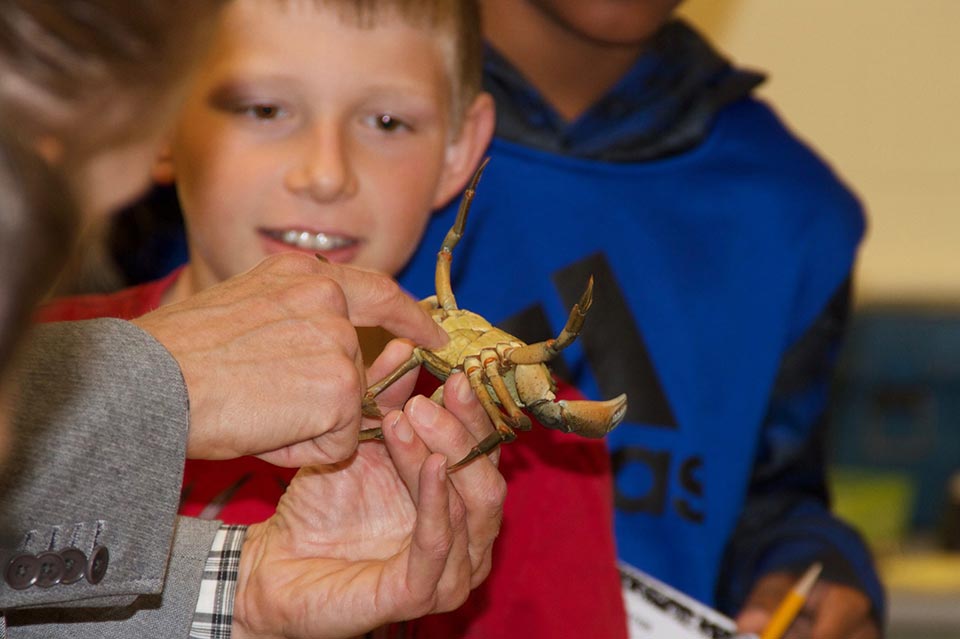 Five Tips for Talking to Kids about Sustainable Seafood

Every One Fish Foundation class starts with two important points, regardless of whether I’m speaking with elementary school or graduate school students. First, I define sustainable seafood as being local, abundant, and harvested or farmed using balanced ecological methods, weighing socio-economic considerations, and complying with local, state, and federal laws.

Second, I describe why eating sustainable seafood matters. Of course I scale the content to fit the age bracket, but these two points are essential to framing the rest of the conversation.

I want all students to understand their relationship to seafood. And I want them to feel empowered to ask questions about the seafood they encounter and take responsibility for their decisions regarding it.

You, too, can teach your children to own that relationship with these five tips for talking to kids about sustainable seafood.

Help children see their relationship to seafood, even if they think it’s yucky.

A majority of the students I teach (mostly along the coast) do like some type of seafood. From clams and crab to seaweed and salmon, there are many options. It’s important for those that do like seafood to understand how their choices directly impact the sustainability of each species. If they really like sushi rolls with salmon, for example, they should know their menu choice has ecological, economic, and socio-economic consequences based on whether the salmon was caught in the wild and shipped across the country or farm-raised in Maine or elsewhere. Eating either will affect more than their hunger.

If your kid avoids eating seafood, talk to them about how their everyday actions like avoiding plastic products, picking up trash, walking or biking versus car travel have an impact on marine ecosystems.

Tell them a story about the seafood on their plate.

Some pundits say 90 percent of the seafood consumed in America is imported, while others think the imports are around 65%. That’s still a lot considering that we harvest more than 5 million tons domestically. Either way, imported seafood is often the cheaper choice, but consumer apathy also drives this food system dynamic. Your kids like cocktail shrimp, for example, so you run to the supermarket and grab the frozen bag with the best price, not reading the fine print that says, “Product of China”. Most times, that designation indicates the shrimp was farm raised with antibiotics, hormones, and pesticides. The same is largely true for farmed Atlantic salmon.

Knowing where your kids’ seafood comes from is a crucial consideration. If the haddock comes from a fish harvester you know in your community, explain that. If it was caught in the Gulf of Maine, point that out too. If it was harvested in the U.S., talk about how domestic fishermen must follow some tough rules that help ensure we have fish to eat in the future. The U.S. has some of the best fisheries management and food safety laws in the world.

There are fun stories to tell your kids about the seafood on their plates. For example, they might find it cool to learn that lobsters can actually escape lobster traps. The ones that end up on their plates just happened to be in the trap when it was pulled on board.

Learning more about where and how their food was pulled from traps, reeled in, caught in nets, or otherwise harvested contributes to a better understanding of sustainability.

Present seafood as a renewable resource … if we manage to take care of it.

Wild Atlantic salmon is a good example of what happens when humans don’t take care of a resource over a long period of time. We fished them to near extinction and degraded the ecosystems they depend on for centuries. We are taking slow steps toward stock recovery, like eliminating commercial Atlantic salmon harvests and removing dams that block access to spawning beds. Wild sockeye salmon harvested in Bristol Bay, Alaska is an example of a wild salmon population that is abundant because we’ve ensured healthy stocks and pristine spawning grounds. Talk to your children about taking care of the rivers, lakes, and oceans around them.

Seafood is a good-for-you protein.

You’d think this one would be a layup, but you have to guide some younger students toward understanding that what they eat affects how they feel and their overall health. I often use the metaphor of what happens when they eat too much candy to show the direct cause and effect of making good food decisions.

With high school and college students, we can explore more about why seafood is a healthy option, and still discuss some natural and man-made factors like mercury, red tide, and microplastics that can show up in some seafood species.

There are plenty of wow-factor examples in the seafood world that can spark student curiosity. Did you know that scallops can have up to 200 eyes? Or that monkfish, a bottom fish that uses a modified spine as a type of rod and lure to attract baitfish to eat, can swim vertically over 400 feet to feed on small arctic seabirds at night? The oceans and their inhabitants are filled with wondrous mysteries. You can check out some pretty cool species in the One Fish Foundation newsletter’s Fascinating Fish of the Month.

Sparking their curiosity will make kids want to learn more and maybe even spread the word about sustainable seafood and how to enjoy it on many levels.

Here’s a link to the 7 C’s of Sustainable Seafood we developed as a handy reminder for seafood with values.

A version of this article originally appeared in the Fall 2022 edition of Edible Maine.