Day in the Life of a New England Groundfish Fisherman

As the last sprays of daylight faded to black, I stepped off the M/V Finlander in Eliot, Maine and tried to get grounded. I was tired. Damn tired. And a bit sore. We’d left the dock at 1 a.m., traveled four hours to the fishing grounds 65 miles out, fished hard for 9 hours with rod and reel and chugged back to port, docking at about 8:30 p.m. 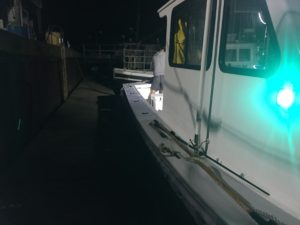 This wasn’t recreational fishing. To get comfortable, I dangled a leg over the gunwale of the 36-foot commercial fishing boat and rested the heavy-duty rod on my leg while jigging a 20-ounce shiny lure and three flies just a foot off the bottom, 400 feet down. When a fish hit, I’d have to crank it all the way up with an industrial-strength reel and hope the 10-foot blue sharks circling the boat wouldn’t steal the fish. Hoist the fish in, measure it after removing the hook, toss it in the tub. Do it again.

Get two fish and you’re likely to be winding 25 lbs or so up 400 feet. POW! A shark hits near the boat and starts smoking line off the reel. The telltale snap two minutes later signals the end of the fight, and you reel up nothing. Time to re-rig. Crank up a couple hundred pounds of fish or so in a few hours, and you’re going to feel it. At least I did. I managed to get past the queasiness and avoid any embarrassment on deck. Any concept of a toilet was sacrificed for an extra bunk to “conserve” some energy on the long rides. The head was a 5-gallon bucket.

It was a long day.

So I had one question for Capt. Tim Rider before I trekked back to my car. “You do this every day?” 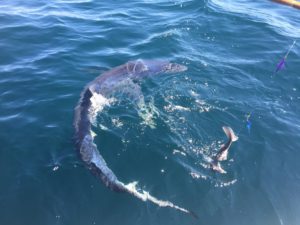 Narrow miss on a dogfish. Check out the video of five sharks circling the boat.

“Just about,” he said, as he cleaned the cabin for the next trip. He’d decided not to fish the next day. We’d brought back 800 lbs. of pollock and haddock, and he would need to drive it to the auction in Portland. (He often sells his catch directly to chefs who share the same beliefs on protecting the resource.) He hadn’t seen much of his family in the past two weeks, having slept in his own bed only two nights in 14 days. The rest of the time he was on the boat.

Fighting to stay awake on I-95 on the way home, I thought about that commitment. Fishing courses through Rider’s veins. It would have to. Otherwise, it sure would be a hell of a lot of work for not a lot of reward. This is particularly true because Rider is part of the Common Pool, a fisheries policy that often forces fishermen like Rider to fish way out because they didn’t have the capital, timing, luck or patience to get the permit to fish the Catch Share sectors. Catch shares are another fisheries policy that operates like a cap-and- trade quota system, often favoring those with the most capital, which can mean access to more desirable fishing grounds. 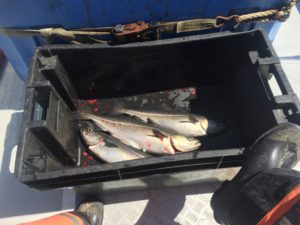 Currently, the outer edge of where Common Pool fishermen are allowed to fish fluctuates seasonally from 18 to 80 miles out. The difference means a couple of hours of travel and probably $300 or so in fuel, tackle and ice.

But the difference runs deeper than that.

When the Maine Department of Marine Resources distributed NOAA funds to offset losses from the groundfish (read cod) disaster relief last year, the money went to fishermen with quota who had the largest landings of groundfish. Those in the common pool were not invited to the table, and therefore, did not receive any disaster relief.

Many ironies exist in fisheries management. And this is one of the starkest examples. Those most hurt by the reduced fishing income were overlooked when it came time to provide financial support. Those like Rider who are so passionate about protecting the fishery that they jig fish in up to 500 feet of water to reduce bycatch seemingly face steeper hurdles than larger scale trawl fishermen, whose bycatch is much more significant. 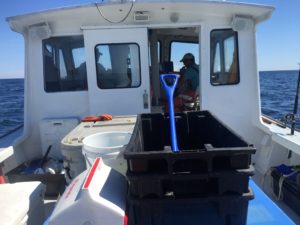 Strategizing the next fishing stop.

It is easy to say this is purely a situation of the haves and have-nots. But fisheries management is much more complex than that. Current New England groundfish regulations were initially established in 2010 on the principal that fishermen would more equitably manage and effectively safeguard the resource by creating a free-market environment. The total allowable catch of groundfish such as cod, haddock, Pollock, flounder and other species was divided and allocated to groups of fishermen in sectors, or harvesting cooperatives, based on who had the largest landings between 1995-2005. Fishermen purchased permits that allowed them to fish for certain species in certain areas within the sector during certain seasons. Under this Catch Share system, they are allowed to continue catching fish during the season until they reach the quota limit for each species.

Unfortunately the Catch Share model overlooks a fundamental truth about fisheries economics: If financial resources determines access, then those with the most financial resources will have the most access. And so, an inequitable system was born and small-scale fishermen like Rider are squeezed … hard. Large-scale operators with the resources are encouraged by the very nature of the “get big or get out” system to grow and gobble up more quota, potentially leading to the type of abuses that led to the arrest of the largest distributor in New England last February.  Carlos Rafael’s arrest underscores another truth about the current system: the bigger players don’t necessarily think in terms of good stewardship.

Which brings me back to the reason I wanted to go out with Tim for what was pre-ordained to be a very full day. He’d tried to convince me soon after we passed the Isles of Shoals on the way out under a half moon sky. “Colles. I’m not kidding. Get some sleep. It’s a long @#$%&*! day. You’re going to need it.” 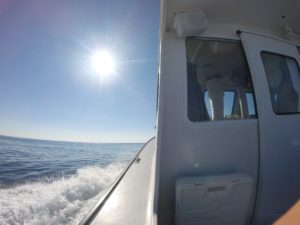 The Finlander heads home. Arrived at dock at 8:30 p.m.

I wanted a glimpse, however brief, of what it’s like to be a New England groundfish fisherman, passionate about the work and the resource, and riding the anxiety of an ever-changing fishery with continually tightening restrictions and razor-thin margins. Debt. Changing ecosystems, but slow-to-change consumer palettes. Perpetually bone tired, fueled on adrenaline and Monster drinks (not me) and taking in what the ocean has to offer: whether it be a full hold to bring back to the dock, un-forecasted six-foot seas, a tuna crashing bait or a giant ocean sunfish lazily cruising the surface.

I’ll think of that experience every time I stand in front of a group of people in a classroom or a restaurant to discuss what sustainable seafood means.

Check out the latest news updates about Capt. Tim Rider and the M/V Finlander crew at New England Fishmonger’s Facebook page. There, you’ll see some of the Seacoast restaurants the Finlander supplies.

Top photo: Capt. Tim Rider tries … unsuccessfully … to finagle his gear back from a blue shark.