Politics can be a complex cocktail of all three.

Too often our faith that politicians will do the right thing falters behind false promises and frustration.

Such is the case with environmental protections. Heavily influenced by giant corporations spending billions in lobbying efforts to extract oil, natural gas, timber, minerals, etc., folks in Congress walk a fine line between their concern for staying in office (which requires funding), and following up on their promises to constituents. They often defend their positions with vows to increase jobs and boost the economy while still expressing concern for the environment. That is, they want constituents to believe all these things can co-exist with extractive industries, when they rarely can. You can’t have your cake and eat it too.

Witness the roller coaster ride to protect wild salmon habitat throughout Alaska in the past few months.

You may have noticed the US Army Corps of Engineers recently denied the permit for the proposed Pebble Mine in Bristol Bay. This is great news, and it’s an astounding turnabout from as recently as July when the Corps had issued its final environmental impact statement (EIS) essentially paving the way for the permit’s approval. 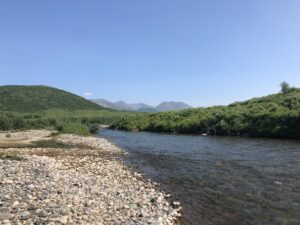 The EIS blatantly ignored several glaring environmental threats posed by what would have been North America’s largest open pit copper and gold mine. Chief among those threats is the risk of a failed tailings dam (which holds toxic waste rock from the mining process) because of potential design flaws, earthquakes, and other natural forces. Moreover, because there’s no magic wand that would make several million tons of toxic waste disappear, the threat of a dam failure would be permanent, which the Army Corps failed to address in the EIS.

Then the momentum changed rapidly. First, several prominent Republicans, including Donald Trump, Jr., spoke out against the mine, setting off a chain reaction of other public figures, including President-elect Joe Biden, denouncing the project. The Corps then sent a letter to Pebble’s owners in late August calling for a mitigation plan that would explain how Pebble would mitigate for the wetlands, rivers, and streams its project would permanently destroy. This was the first signal from the Corps that it was willing to acknowledge the science clearly showing the Pebble Mine would cause significant harm to the Bristol Bay watershed and its salmon fishery.

Then a series of damning secret tapes released in September revealed the greed and audacity of the mine’s owners, who bragged about controlling the state’s governor and US Senators. The mine’s owners also boasted on tape that they viewed the mine not as the 20-year project stated in the permit, but as a much larger 200-year mining operation.

The Corps took the next step on Nov. 25 when it announced its denial of Pebble’s permit, stating the project did not meet its mitigation standards and the proposal was contrary to the public interest. The permit denial was a surprising and much welcome gift to the people of Bristol Bay who have been fighting for their homes, livelihoods, and traditions since the Trump Administration re-opened the door for the mine to proceed in 2017.

Sockeye on the move in the Brooks River, Bristol Bay.

Again, this is great news. I think of all of the salmon warriors I’ve met in the past several years who continue to dedicate so much of themselves to protect the world’s largest intact wild salmon run. I think of the amazing coalition of different user groups like commercial, recreational, and subsistence fishermen and women, who are often at loggerheads, that continue to stand united against this imminent threat to their salmon and their lives.

However, the Bristol Bay watershed is not fully protected. Pebble is stopped for now. But this salmon-rich region will not be fully safe from such threats until permanent protections are in place. If we have learned anything from the last four years, it’s that Bristol Bay is at risk from changes in political winds. So we need to ensure that it is protected for generations to come.

On December 2nd, the Bristol Bay region released its vision for what these long-term protections should look like and a two-step roadmap for how we might get there. First, the EPA needs to use its authority under the Clean Water Act to veto the Pebble Mine and establish clear, science-based restrictions on mining activity in Bristol Bay’s headwaters. The region has been asking for an EPA veto from the outset.

Second, Congress needs to designate a national fisheries area to provide permanent federal protection for the watersheds of Bristol Bay against any toxic mine waste from any project like Pebble. 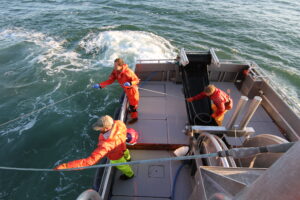 Captain Steve Kurian and crew aboard the F/V Ava Jane, fishing for sockeye in the mouth of the Naknek River.

All of this comes back to the question of why the administration changed its mind so fast. And it speaks to the façades so prominent in politics. Alaska Governor Mike Dunleavy has been quite vocal in his support of the mine, even posing for a photo aboard Air Force One ostensibly during a meeting to promote the mine.

Until recently, Alaska’s US Senators Lisa Murkowski and Dan Suillivan have said they opposed the mine, but they’ve been fairly non-committal about actually stopping Pebble … even after a majority of Alaskans had said they oppose the mine. Neither senator called for a clear, outright rejection of the project until after the release of the Pebble Tapes claiming they were in the pockets of Pebble’s owners and sitting quietly in the corner while the permitting process played out. Strange timing.

Bristol Bay is just one example of the pitched battles to protect vital natural resources across Alaska and throughout the US. During all of the publicity around the mounting political opposition to Pebble, the administration began to redouble efforts to green light other extraction projects it had advocated for in the past couple of years. 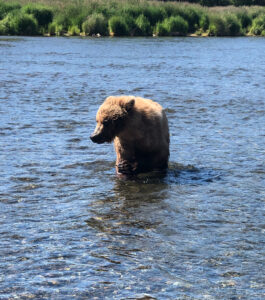 Brown bear on the prowl below Brooks Falls near Naknek and Brooks lakes.

The administration accelerated a push to remove the so-called “roadless rule” protection from the Tongass National Forest, the largest intact temperate rainforest in the world. Removing this protection literally paves the way for clear-cut logging in this pristine, 9 million acre forest, which has been described as the lungs of North America because of its oxygen output and carbon sequestration. It also contains thousands of streams that are home to myriad species, including many anadromous fish like wild salmon and trout.

At the same time, the administration opened up the Arctic National Wildlife Refuge (in Northern Alaska) to oil drilling, having posted the auction for permits on Dec. 7.

Is it a coincidence that these two environmental threats were more actively pushed forward while Pebble was retracted?

The timing of all of this raises questions considering the Army Corps called for the mitigation plan in late August and denied the permit on Nov. 25. Some observers who closely watch environmental politics suspect a deal was made. Save Bristol Bay, but sweep aside the roadless rule and open up drilling in ANWR.

Enter the futility of politics. If in fact a deal was made to save Bristol Bay at the expense of the others, the frustration is maddening. The notion of trading precious natural resources like poker chips is appalling. Especially when the pristine ecosystems in question support myriad species as well as Alaska citizens and tens of thousands of jobs in industries that carry a multi-billion dollar economic impact to the state … without the ecological threat of rampant logging and mining.

Here’s what we know:

Melanie Brown, salmon warrior. She fishes commercially on the site her great grandfather established on the Naknek River.

The sheer will and collective unity to protect the resource, the people, and the Native cultures that depend on the annual return of Bristol Bay salmon is at the heart of why the Pebble Mine is not now operating. Even when the mine seemed inevitable back in July and countless folks on the frontlines felt burned out from standing up to the mine for as long as 15 years, the fight continued. More people from diverse backgrounds rallied to the cause. This powerful coalition will continue to fight until Bristol Bay gains permanent protection.

Perhaps we should view the collective efforts that put the Pebble Mine on its deathbed as a blueprint for how to address similar threats to important natural resources. It’s a testament of how standing up to heavily funded corporations and confounding politics to protect priceless resources is not only possible, but definitely achievable.

There are already long-standing, dedicated movements to safeguard both Tongass and ANWR (see calls to action below). The success of this opposition, as with every other effort to protect critical habitat, again hinges on the continued persistence, time, energy, and faith of a broad coalition willing to persevere against what seems like long odds. In the end, our voices matter, whether we live in the region, state, or even time zone where these ecological challenges exist.

For if we don’t unite to navigate the political waters to protect our most precious resources wherever they are, the resulting cocktail will prove toxic.

Here are ways to learn more and engage:

Stop Pebble Mine Now: Direct calls to action to ask EPA to veto Pebble Mine and ask Congress to permanently protect Bristol Bay.

Defend the sacred: Here is a specific month-long targeted call to action.