I have many things to be thankful for, and I reflect on them with more focus this time of year: my loving wife, my imaginative daughter, close family and friends, a roof over our heads and clean water, to be sure.

A strong bond with Nature is also on that list. Countless hours and days on the water or in the woods with my dad taught me to drink in the sights and sounds of fish swimming, birds flying, frogs croaking, deer grazing, bugs buzzing, etc. I’ve learned to accept what Nature has to offer.

I was reminded of this earlier this month when I flew with my cousin from New England back home to New Orleans to fish for bull red drum in the Mississippi River delta. Since graduating from high school in 1984, I’ve done very little fishing in the waters where I grew up. My dad and I used to fish bayous around Lake Borgne and Lake Pontchartrain, and sometimes we drove down to Venice or Empire to go deep sea fishing.

The excitement was palpable as we left the dock in those days, knowing that in those waters in and around the delta, whether near oil rigs or out in the open, we could catch a wide variety of species. Grouper, snapper, jacks, king mackerel, pompano, sharks. You name it. The Gulf of Mexico had that big of a bounty.

I wondered how things had changed a couple of weeks ago as we stepped onto the Capt. Travis Holeman’s boat heading out of Venice. Several hurricanes, including Katrina, the oil spill and countless other factors had conspired to change the delta dramatically since I’d last been there.

I’d read that the coast is losing up to 30 square miles a year of shoreline, and the problem could get worse as sea levels rise. With 10,000 miles or more of canals dug out of the delta, protective freshwater marshes are being overrun with saltwater that kills the plants and weakens the soil.

Regardless, the biomass in Southeast La. is significant. Even on windy overcast days with fronts that drop the temperature by 10 degrees, marine and avian life seems to bubble over. Multiple shrimp and pogie boats worked offshore, bringing in tons of seafood. The pogies jumped out of the water, often creating enough of a disturbance to entice 20 lb. redfish off the bottom. Pelicans slammed into the water and came up gulping oily mouthfuls of protein. The terns and gulls also worked the water, especially marauding the trail of bait and shrimp left by the shrimp boats.

We caught and released several fish ranging from 12 to 30 lbs. We saw sharks and dolphins work the shoreline as giant jacks darted in close to shore to eat, then disappear. We saw how quickly conditions could change out there, based on wind, atmospheric pressure and water clarity spilling out the river, particularly after heavy rains in states up north. 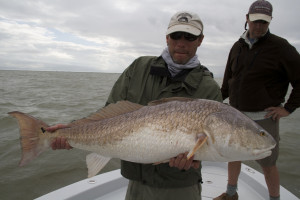 The bottom changes constantly, and even “current” NOAA maps are out of date because lagoons, islands, ponds and other geographic features disappear daily.

That the delta has changed significantly since the last time I was there was evident. That it will continue to change as significantly remains to be seen. But indications are that the coastline will continue to pull back as the ocean gobbles up the fragile, yet protective marshes that are critical nurseries for a variety of important species. The delta is sinking as some scientists predict the Gulf of Mexico could rise about 4.5 feet by the end of the century.

I can only hope the rich biomass can adapt with the coming changes … because it is a special place, unique in its diversity and scope, that holds a strong connection to my past, and the love I’ve always had for Nature.