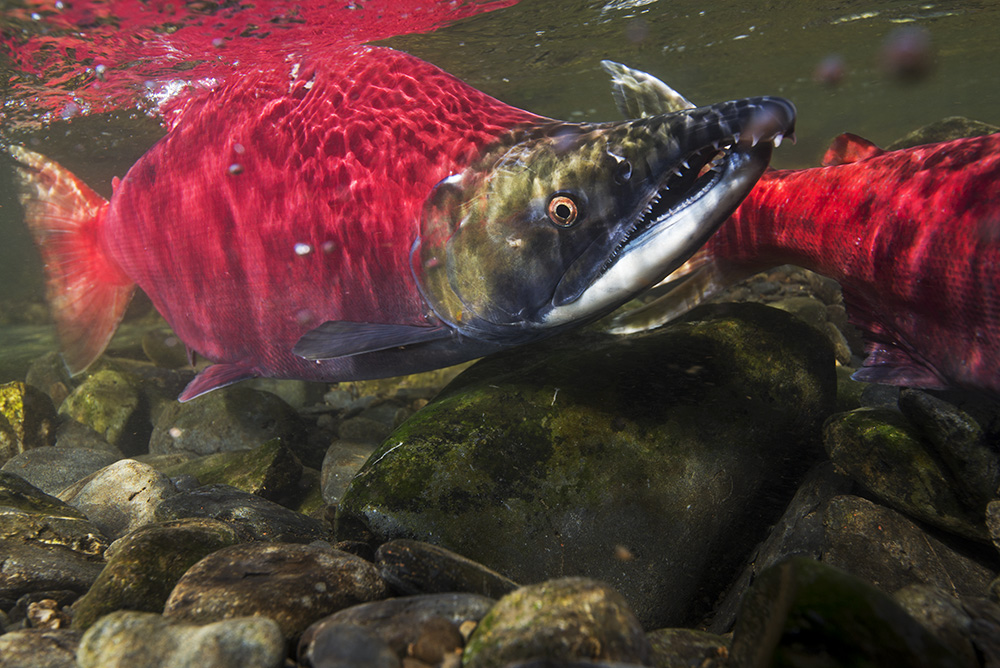 Top photo: Spawning sockeye salmon
From the book, The Salmon Way: An Alaska State of Mind, by Amy Gulick
©Amy Gulick/amygulick.com
To buy the book: www.thesalmonway.org

If we humans were to be judged by how we treat natural resources, we’d be up a creek … likely a toxic creek.

I’ve focused on the proposed Pebble Mine in Bristol Bay, Alaska for several years. This would be a massive open pit copper and gold mine at the headwaters of the world’s largest wild sockeye salmon run. It would jeopardize the runs of several salmon species and the water supply and food source for thousands in and around the bay as well as the livelihoods of thousands of fish harvesters and those working at processors. Not to mention the impact on millions of Americans who eat wild Alaska salmon.

These types of mines generate billions of tons of highly toxic waste like cyanide, arsenic, and copper that are deadly to fish and their habitat. And they have a long and incontrovertible history of failure.

The Pebble mine’s Canadian owner, Northern Dynasty Minerals, has spent millions of dollars on lobbying Alaska’s governor and the Trump Administration to steamroll its scientifically flawed, questionably ethical permit application through the Army Corps of Engineers. The Corps has already said it will NOT take into account the worst-case scenario of a tailings (toxic waste) dam failure because it does not consider it likely … despite the fact the site is in a very seismically active area and tailings dam failures have happened elsewhere around the world. 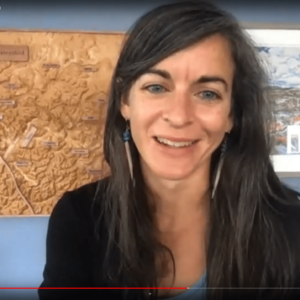 Elizabeth Herendeen of SalmonState providing some good perspective on opposition to the Pebble Mine during the Slow Fish Crew Together Webinar.

As Elizabeth Herendeen of SalmonState mentioned during the last Slow Fish Crew Together Webinar on June 5, a majority of folks in Bristol Bay and throughout Alaska have consistently opposed the mine. And yet, Pebble sits on the precipice of gaining the federal permit it needs to move forward. The Corps of Engineers could make an announcement some time in June or early July.

Others we heard from during the webinar about the perils of the mine and what we can do now include dear friends Captain Katherine Carscallen, “The Wild” film director Mark Titus, Melanie Brown of SalmonState, and Jon Broderick, who launched the amazing Fisher Poet Gathering in Astoria, Oregon and sang a lament about the loss of the wild salmon in Bristol Bay if the Pebble Mine were to ever be approved. 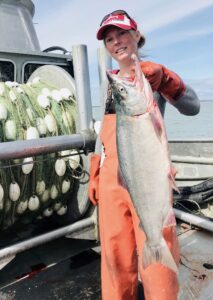 Born and raised in Dillingham, Alaska, Katherine is a drift netter who shared a heartfelt  and compelling viewpoint about her deep personal connection to the bay, the fish and the community, and why she has been fighting this mine for more than a decade. “Our concern is that it would be a permanent, and irreversible and hugely damaging change to our entire region. It’s salmon country. That’s what Bristol Bay is about, and this [mine] is proposing to change that entirely,” she said.

“The only reason we don’t have a mine and a mine hasn’t been built in the past 16 years since it’s been threatened is because not just Bristol Bay residents and Alaskans, but really people all over the nation have come together to help us on this issue and speak out about it,” Katherine said. “It really makes my heart swell that so many people who’ve never even been to Bristol Bay care so much about this issue.”

Mark Titus shared an equally personal story about starting to film “The Wild” shortly after leaving rehab for addiction in 2016. He returned to the bay to tell this story in part as a way to reconnect to the bay, the land, the salmon, and the community that he’d fallen in love with decades before. 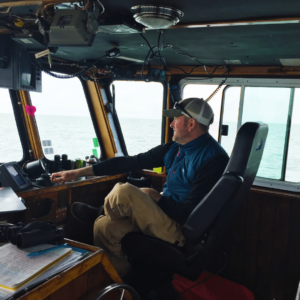 “I was really called back from this place that I was in by this love for these wild salmon which are the ultimate symbol to me of sacrifice and of giving of themselves so that life itself can continue,” he said. “This film is about that journey and using the metaphor of my own recovery from addiction to paint the picture about where we are as a people and as a species and how we treat this planet.”

Melanie Brown began the webinar with a spiritual tone, telling the story of her great grandparents who were orphaned by the Spanish flu in 1918, and who had to make their way into adulthood on their own. Her great grandfather transferred his setnet lease to her. Last summer, Melanie taught me how to pick sockeye out of the net from the same spot.

“I truly believe it was the salmon who gave the people who were in despair hope and taught them a path forward, and were their guides literally,” she said. “I’m here because of the salmon and because of the strength of my great grandparents. My people ended up here in Bristol Bay because they followed the salmon. I’m so blessed to be of this land.” 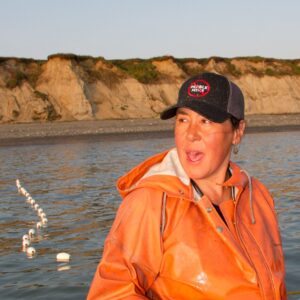 Melanie exudes good cheer and hope, even during the fourth set of the day heading toward midnight.

Speaking of the mine, she said, “It instills in me great fear. But that fear is overridden by the hope that salmon give me. I hope that you find hope in the salmon stories that you hear today.”

And it was that hope and a general call to get involved that resonated from everyone’s words.

As I said at the outset of the webinar, “In many ways, the story of salmon and how we treat them and their environment reflects the story of ourselves.”

We need to get this right. We want our children and successive generations to be able to experience wild places like Bristol Bay, where crystal clear waters call the wild salmon home every year to keep sustaining this magical life force.

Elizabeth, who’s spent more than a decade at the forefront of the opposition to the mine, encapsulated the urgency of the situation: “I think this is a really critical moment for anyone who cares about wild fish and wild salmon. This is our last chance to do it right the first time. We all need to share responsibility and take the time to be engaged.”

I’ve included some links below on how to learn more and get involved. These next few months for Bristol Bay will be important, and every voice matters.