Boy, was my Alaska trip’s timing impeccable. I got to see the pulse and vibrance of the fishery and the economy it supports. I got to see the deep connections people of all stripes have to the salmon, the water, the land. I arrived during the heart of the world’s largest sockeye run.

I also arrived just as the Environmental Protection Agency District 10 in Seattle issued a blistering statement castigating the US Army Corps of Engineers’ draft Environmental Impact Statement on the proposed Pebble Mine. The letter claimed the EIS had some serious flaws, and “…may result in substantial impacts to waters of the United States within the Bristol Bay and Cook Inlet watersheds.”

Folks I spoke with about the EPA statement felt bolstered by the statement after fighting the mine for over a decade, particularly given the administration’s push to approve the mine in the past two years.

But as I said before, this is a chess match, and the administration yesterday pulled what I’m sure they consider a “trump” move by rolling back federal Clean Water Act protections for Bristol Bay established during the Obama administration.

Make no mistake. This is outright politics at the expense of natural resources and the 15,000 people who depend directly and indirectly on those resources, whose total economic impact is now valued at over $1.5 billion. At stake is a truly priceless, irreplaceable resource that can continue to fuel the region’s economic engine … or billions in profits for a small group of investors. Do corporate interests really outweigh the rights of citizens?

Think of the colossal irony. Think of Chris Hladick, the EPA Region 10 Administrator who penned the July 1 letter slamming the EIS, only to be forced to publicly backtrack. Several entities supporting the mine claimed they wanted to see the science that this mine could harm the natural resource. Hladick pointed out some of the flaws in the EIS in his July 1 letter. The EIS itself essentially skated over the original finding from the EPA under the Clean Water Act in 2014, declaiming the potential devastating harm of such a mine on the salmon and its habitat.

Yesterday’s announcement demonstrates the folly that mine supporters call “due process,” but is more a proof point of power politics, influence, potential collusion and graft. It screams, “JUST JOKING! We mean to railroad this mine through and strip the very protections we said would preserve the resource in the region.”

I’ve just talked to a couple of people fighting the fight. They are angry and sadly unsurprised at the political arm-twisting from the administrations of both governor and president. Particularly as this arm-twisting is in support of a mining company based in Canada, not the U.S. 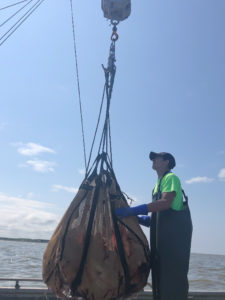 A deckhand on a tender weighs part of Melanie Brown’s set net sockeye harvest during the heart of the season.

But the folks I spoke to are still resolved.

They have to be. In their view, their lives and livelihoods are essentially at stake. As for the mine’s investors, their bank account profits are at stake.

This issue forces people to check their moral compass. If we can’t protect the salmon, their habitat, and the thousands who depend on them, where are we headed? What does this mean for other priceless public spaces?

If this issue has struck a cord, follow this link for more information on how to speak out and get involved. Contact your representatives and senators in Washington, D.C., regardless of where you live. Every voice counts.

Also, stay tuned for the Fish Tales Podcast, which will feature the voices of those on the front lines of the battle to save Bristol Bay from such wanton development. You’ll hear what life is like in Bristol Bay, and why preserving it matters so much to those who live and work there.