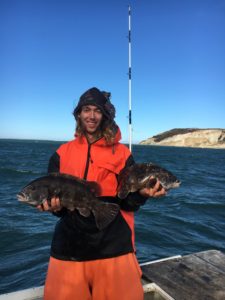 Otto Osmers with the freshly caught tautog for the dinner at Atria. Know the story of your seafood!

Otto Osmers sat down at a table with white linen, nice wine glasses, shiny silverware, an impressive printed menu featuring several courses and wine pairings and a bunch of folks he didn’t know. Sporting a ball cap, long hair and an easy smile, he calmly introduced himself as the stern man on the fishing boat that caught part of the night’s meal.

Though he’d initially expressed some reservation about being able to contribute to the conversation in a meaningful way, he earned the respect and attention of everyone at the table (and a round of applause from the nearly 60 people in the restaurant) by the end of the night.

Not bad for a 19-year-old who’s been fishing commercially since he was 15.

Score another success for the KNOW FISH Dinner® series.

The most recent KNOW FISH Dinner took place at Atria Restaurant in Edgartown on Martha’s Vineyard Oct. 26. The dinner was part of the annual Martha’s Vineyard Food and Wine Festival and was the product of the kind of collaboration that unites chefs, fishermen and advocates in ways that give hope to the notion we can change the industrial food supply chain. 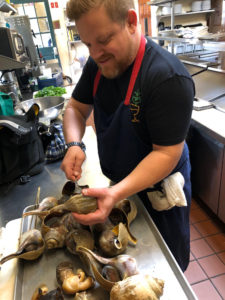 Chef Brendan Vesey of Botanica Restaurant and Gin Bar in Portsmouth, N.H. was among the group of thinkers that helped build the KNOW FISH Dinner series in 2015. He and other Portsmouth, NH-area chefs were planning to participate in the massive tasting event during the Food and Wine Festival, but decided they wanted to do their own dinner during the four-day event.

So Brendan contacted me about doing a dinner that promotes the connection between seafood harvester and consumer and upholds the values behind a truly responsible seafood supply chain. This was in late Sept. Brendan connected me with Chef Christian Thornton at Atria, who is close friends with Chef Duncan Boyd, one of the original One Fish Foundation board members.

I then reached out to One Fish Foundation Board member and fellow Slow Fish colleague, Brett Tolley, who put me in touch with Shelley Edmundson of the Martha’s Vineyard Fishermen’s Preservation Trust. Shelley and her team work to support the livelihoods of the fishermen on Martha’s Vineyard. She connected me with Otto, Capt. Nick Wilbur, Captain Andrew Wheeler and Captain Arno Ewing. 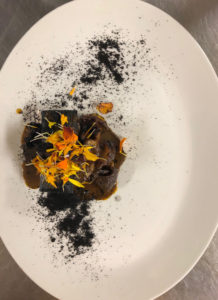 Capt. Nick and Otto caught the tautog (think a brutish looking bottom fish with big lips and human-like teeth, per Otto’s great description to the crowd) that was served with the green crab gumbo prepared by Chef William Myska of Ore Nell’s Barbecue in Kittery, ME. Captain Andrew harvested the conch that Chef David Vargas of Vida Cantina in Portsmouth, NH turned into masa miso cured conch with squid ink tamale. 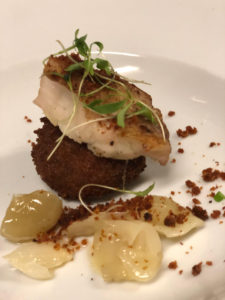 Capt. Nick Wilbur’s tautog resting on a fried okra cake prior to being smothered in smoked green crab gumbo prepared by Chef Will Myska. Perfect for New England fall.

All of the food was excellent. And the stories the chefs and the fishermen told about the seafood, how it was harvested, how it was prepared, helped stitch together this newly created ad hoc community of chefs, fishermen and consumers.

The KNOW FISH Dinner at Atria reinforced that. Yes, both the seafood and produce were “local,” or as local as possible (from Gulf of Maine, and some farms in N.H. and Maine). But what stood out to everyone in attendance were the stories from those who harvested and prepared the food.

Everyone, including those from the island and off-island, left knowing something more about the food they ate and the different links in the seafood supply chain. Before closing out the event, I asked folks to carry those stories with them and that sense of community we’d built. I asked them to try and establish relationships with fishermen or fishmongers and chefs in their community. Build the trust that elevates the community and the values we discussed. Ask questions.

And spread the message.

Big thanks to everyone who helped make this event happen, including the fish and shellfish harvesters: Otto, Capt. Andrew, Capt. Nick, Capt. Arno Ewing, Ryan, Capt. Keper, and Shelley for making the connections. Thanks to the chefs: Brendan, David, Will, Jeremy, and the entire crew at Atria. Special thanks to Chef Christian Thornton for hosting the event. Thanks also to Shauna Troy and J. Lohr Wines for providing the great vintner’s accompaniment to each course. Thanks to the Martha’s Vineyard Food and Wine Festival.  And many thanks to everyone who attended and elevated the discussion!

Top photo: Capt. Keper Connell tells the story of the bluefin tuna he caught and that everyone was enjoying.