UPDATE Sept. 3, 2017  Recent reports indicate Cooke Aquaculture Pacific (subsidiary of Cooke Aquaculture) acknowledged in permit filings in February that the three-pen farm that failed in August was “nearing the end of its serviceable life” with visible rust and corrosion. Part of the permit application was to re-align the net pens so they would not be broadside to one of the strongest currents on the west coast. The application was filed shortly after Cooke bought the farm from Icicle Seafoods in 2016. But Cooke never fixed or replaced the pens, and a last-ditch attempt to stop the pens from drifting in the powerful currents in July proved futile on Aug. 19 when structures collapsed and more than 160,000 fish escaped.

There is increasing pressure from several fronts, including some state legislators and several regional native American tribes to stop the expansion of aquaculture in Puget Sound.

The idea that such high numbers of Atlantic salmon could potentially out-compete wild, native Pacific salmon for food, spawning grounds, etc. or even mate with them, has several environmental groups and commercial fishermen sounding alarms.

We should all be concerned.

Fish escapes from net pens are nothing new. It has happened several times with different ecological and social impacts in the past 30 years. Net pens are vulnerable to big storms which can crumple them up and leaving gaping holes.

This particular incident, which happened on August 19 at a facility owned by the massive Canadian firm Cooke Seafoods, is particularly notable for several reasons.

So what does this all mean?

For me, it is yet another illustration that industrial scale finfish aquaculture has a long way to go before it truly delivers a net environmental, ecological, sociological and yes, financial positive. 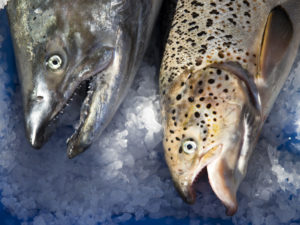 Young Chinook are now leaving West Coast rivers to head to sea, and could be a prime food source for the 10-pound Atlantic salmon swimming about. Other potential impacts the farmed fish could have on wild stocks such as Chinook and Coho salmon now returning to spawn include increased competition for food, the potential for spreading disease and potentially weakening the gene pool from inter-breeding.

Many scientists agree we don’t have enough information to really know the impact of farmed salmon escapes. Some researchers doubt whether farmed Atlantic salmon can survive in the wild. Others doubt that they would really mate with wild, genetically different species, or that if a few did, the consequences would be negligible.

In the absence of real, credible data, I side with those who are concerned. Just because we don’t know with certainty all of the ecological threats escaped farmed salmon could pose on wild populations, we should NOT ignore the potentially significant damage. Put another way, this issue should serve as yet another warning that profit-driven finfish aquaculture, sometimes deemed marine feedlots because of industrial approach, is inherently dangerous.

It’s dangerous because these types of issues: escapes, algal blooms, disease, antibiotic use, etc. continue despite corporate attempts at greenwashing. Witness the mess created by the Chilean farmed salmon industry, which lost over a billion dollars last year after a huge algal bloom sparked a deadly bacteria outbreak that killed millions of fish.

Just because there isn’t tons of research doesn’t mean there aren’t readily identifiable stories supporting the need for caution. For example, one study from the University of Victoria relies on DNA sampling to confirm that some escaped Atlantic salmon had spawned in the Tsitik River in British Columbia in the late ‘90s. Another study showed that Atlantic salmon inhabited more than half of 41 known Pacific salmon rivers on Vancouver Island.

All of this is set against a new industry dynamic in which global aquaculture operations are scooping up smaller wild harvest operations. Last year, Cooke purchased Icicle Seafoods, Inc. of Alaska, a longtime, well-recognized company specializing in wild harvest of Alaska seafood and farmed Atlantic salmon.

Is this simply an attempt to diversify its seafood portfolio to minimize the financial risks of salmon farming, or is it an attempt at greenwashing the mounting concerns of farmed salmon by providing wild caught product? As my colleagues and executives of the Sitka Salmon Shares community supported fishery Nic Mink and Marsh Skeele write in their latest blog, “You buy farmed fish: they win. You buy wild fish: they win.”

I am not opposed to aquaculture in principal. I know several bivalve farmers who are doing good things with oysters, mussels and clams and are taking care not to over-crowd their beds. I know there are certain small-scale, artisanal finfish operations that provide subsistence to impoverished communities in Africa with minimal ecological footprint.

But as with many issues in fisheries, scale simply magnifies the damage when something goes wrong. So we need to do more research on the potential impacts of escaped farmed finfish on wild populations and ecosystems. We also need to look deeper into lowering the cost and technology barriers to land-based re-circulating systems that reuse the water and minimize the ecological impact of net pen operations. Finally, we have to re-think how we feed these farmed fish because grinding up millions of tons of forage fish like Menhaden for fish pellets every year stresses a critical layer in marine food webs.

Would that the industry takes note … sooner rather than later.

Cascadia Weekly column by former fisherman and activist Anne Mosness providing a good historical perspective on how industrial finfish aquaculture, or marine feedlots, rose to prominence in the Pacific Northwest.