Getting Hands Wet and Talking Seafood

Every time I speak to a group of students, campers, adults, etc. I learn something.

First, I learn what the audience knows and doesn’t yet comprehend about seafood sustainability in broad terms. I learn who in the audience is more ready to engage in discussion, who wants to challenge pre-conceived notions, and who isn’t really into the conversation.

Depending on the age group and location, these types of interactions can sometimes provide glimpses into a community’s overall seafood IQ. Observing students while I teach a class also provides a mirror of how effectively I’m getting the message across. 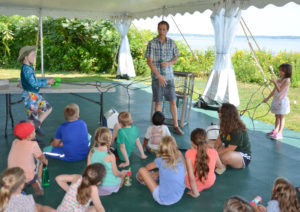 Gill nets are hard to see on land as well as in the ocean. Photo: Rich Harty

My first observation at the Seacoast Science Center in Rye, N.H. this week was how lucky the Seaside Safari campers were to have such a program. Set on the shore near Odiorne Point, surrounded by acres of tide pools loaded with lobsters, green crabs, seaweed, etc., the camp provides direct, hands-on access to coastal marine ecosystems. Campers handle live green crabs while learning about invasive species; they turn over rocks and hunt for juvenile lobsters while learning about food webs; they talk about the warming Gulf of Maine while learning about climate change.

So it was a privilege to learn some things from these campers as we chatted. I re-confirmed that green crabs are a very effective, hands-on prop … almost to the point of distraction when they started fighting.

I learned that these campers, when prompted, were generally eager to learn how seafood ends up on their plates. They wanted to know how a turtle excluder device works, and its impact on reducing bycatch. 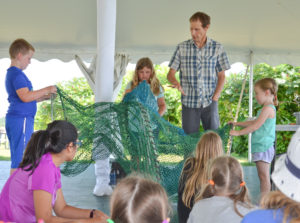 Some campers who had fished recreationally before were genuinely surprised that some fishermen use rod and reel to fish commercially. They were intrigued by the weight of the 14 oz jig used to get the flies down 400 feet to where the haddock, cod and pollock are.

They were also pretty enthusiastic about touching the dead Atlantic mackerel while learning that mackerel are one of several forage fish species that are very important to seafood webs.

And they began to see their relationship to the seafood they eat.

And I learned, once again, that I love what I do.