“How do you know if it’s truly local?”

The question from Jordan Pike of Two Toad Farm in Lebanon, ME. during Thursday night’s KNOW FISH Dinner™ at 7th Settlement Brewery  in Dover, NH was seemingly simple. It is a question any farmer, fisherman, chef, baker or food producer encounters on a regular basis. But its implications are more significant because the complexity of the seafood system in the U.S.

We were discussing the dynamics of the domestic seafood system and some of the drivers behind the fact we import more than 90 percent of the seafood we eat in this country. That’s ironic when you consider we harvest over 5 million tons of seafood domestically on an annual basis… plenty enough to meet the demand. 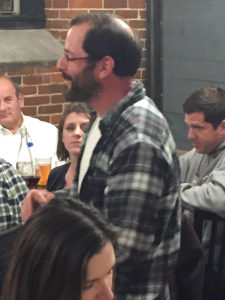 Brian Gennaco of Virgin Oysters explains why oyster aquaculture is a labor of love. Three years from seed to harvest.

One of the largest hurdles is habit. We discussed how habit drives much of the seafood purchases linked to foreign sources. For example, consider the widespread habit of buying the same thing weekly, at the lowest price, without trying to find out more about where things like frozen shrimp or salmon fillets come from. Similarly, there is the habit of continuing with a flawed management system that opens the gate for cheap imports to feed the consumer habit.

Asking questions is one of the most effective ways to change these habits. I told the 35 attendees one of the first questions to ask is “Where is it from?” Buying locally sourced seafood is at least an initial step away from imports.

But Jordan’s question is also at the crux of getting to know our food and improving the relationship we have to our seafood. At its core, the question pits small local food producers against big operators like Monsanto, Thai Union, and the now somewhat defrocked “Codfather”, Carlos Rafael. Rafael, the largest fishing operator on the East Coast, was recently sentenced to nearly four years in prison, three years of additional probation and more than $200,000 in fines after pleading guilty to 28 counts of fisheries fraud. The court also seized a small portion of his assets. 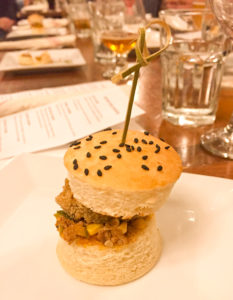 One of Brian’s delicious oysters.

Jordan took the “local” question further. “How do you know the scallops you eat aren’t coming from boats owned by Rafael?”

The answer isn’t simple. The U.S. is lagging in terms of comprehensive, transparent labeling systems that provide easily accessible information. The EU has such a system, and both consumers and fishermen are generally happy with it; consumers for obvious reasons, fishermen because they see it as a competitive advantage.

Absent such labeling, we must try to find such information by owning the responsibility to ask questions. Thursday night, we discussed the importance of forming relationships with fishermen in our communites or with restaurants and stores that buy seafood directly from fishermen in the community or the nearby region. 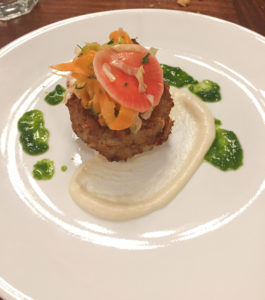 The seafood counters and many of the restaurants I patronize know me and know I’m going to ask questions. They also know I can tell visually how relatively fresh different fish and shellfish are. They may not be able to tell exactly what boat Acadian Redfish on display is from, but they can tell me if it was caught in Casco Bay and when it was cut.

The truth is you may not really be able to learn the provenance of every piece of seafood you buy. Terms like “local” and “organic” have been co-opted improperly so often that their meanings have been diluted. So you ask questions, observe and make educated assumptions. And once you have established a relationship with a fisherman and/or a fishmonger or restaurateur you trust, you will have significantly increased the chance the seafood was harvested responsibly.

It was an excellent question that sparked a good conversation about what we as consumers can do to understand and embrace our relationship to the seafood we eat. 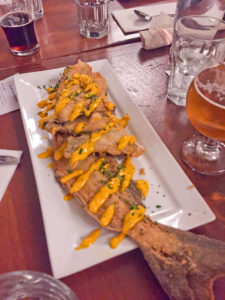 Look at all of that fried goodness! The remoulade was outstanding.

And it was just one part of a great evening of storytelling and diving into key issues with perspectives from Capt. Tim Rider of New England Fishmongers who donated the fish, Brian Gennaco of Virgin Oyster Co. who provided the oysters, and Chef Taylor Miller who put on a feast. (How about delightfully seasoned tuna pastrami, perfectly fried pollock carcasses and collars with plenty of meat on the bones, cornmeal dusted fried oyster with chorizo on brioche with garlic aioli, and some especially delicious gin-brined baked pollock served with cornmeal fried pollock with dill salt???)

We also heard from Joe Letourneau, the only other full-time, rod and reel groundfish commercial fisherman in the Gulf of Maine (aside from Capt. Rider); and, Kevin Jackson, who has a unique perspective as a NOAA observer that accompanies fishermen like Tim and Joe to research a variety of species, like wolfish. Kevin’s work is an example of scientists collaborating with fishermen on critical research to learn more about ocean resources. 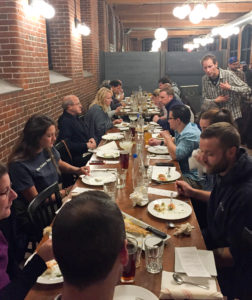 Conversation upon conversation, building a movement.

This was the 5th dinner in the KNOW FISH Dinner series, and it is a continuation of our mission to change minds one conversation at a time. Attendees left with several compelling conversations to think about, as well as a menu with the 7 C’s of Sustainability printed on the back.

The next KNOW FISH Dinner will be at Otis Restaurant in Exeter, N.H. on Nov. 2.

Come join us for great food and a broader seafood perspective!